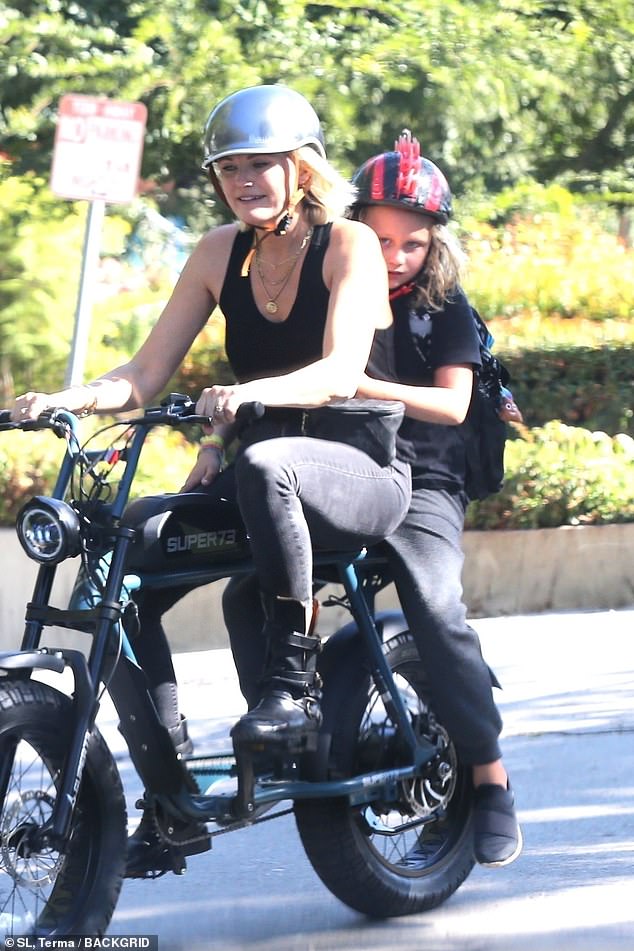 By Kevin Kayhart For Dailymail.com

Malin Akerman and his eight-year-old son Sebastian often like to feel the wind blowing hard on their faces when they ride an electric bike.

And on Friday, they hit the Los Angeles sidewalk again on another hot and sunny Southern California afternoon.

The Billions star seemed overjoyed to share the moment and the ride with her boyfriend, sitting behind her with his arms wrapped around his waist.

Baby biker! Malin Akerman, 43, and his eight-year-old son Sebastian enjoyed an electric bike ride through the streets of Los Angeles on Friday

The actress, 43, was seen pedaling as she turned the accelerator wearing skin-tight black jeans and a matching tank top.

She also donned black leather boots, which reached mid-calf, and a shiny metal helmet for added security over her blonde tresses.

Sebastian held on as they walked the busy streets in black sweatpants, a matching t-shirt and navy sneakers.

He wore a unique helmet that appeared to have a row of horns along the top.

Lady in black: The Billions actress was seen pedaling as she turned the accelerator dressed in black, made up of skinny jeans, a tank top and leather boots

The 27-dress actress can often be seen driving Sebastian home from school on his electric bike.

She shares her boy with her ex-husband, Italian musician Roberto Zincone, whom she separated in 2013 after about six years of marriage.

Akerman has since moved and married a 35-year-old British actor Jack Donnelly, who is best known for his role on the BBC series Atlantis, at a Mexican ceremony in December 2018.

Need for Speed: The 27-dress actress can often be seen driving Sebastian home from school on his electric bike

The couple had been friends for many years before deciding to add some romance to their relationship in early 2017.

The Swedish-Canadian actress has been recognized by the general public for films such as The Utopian Society (2003) and Harold & Kumar Go To White Castle (2004). She had her first leading roles in feature films with The Heartbreak Kid (2007) and 27 Dresses (2008).