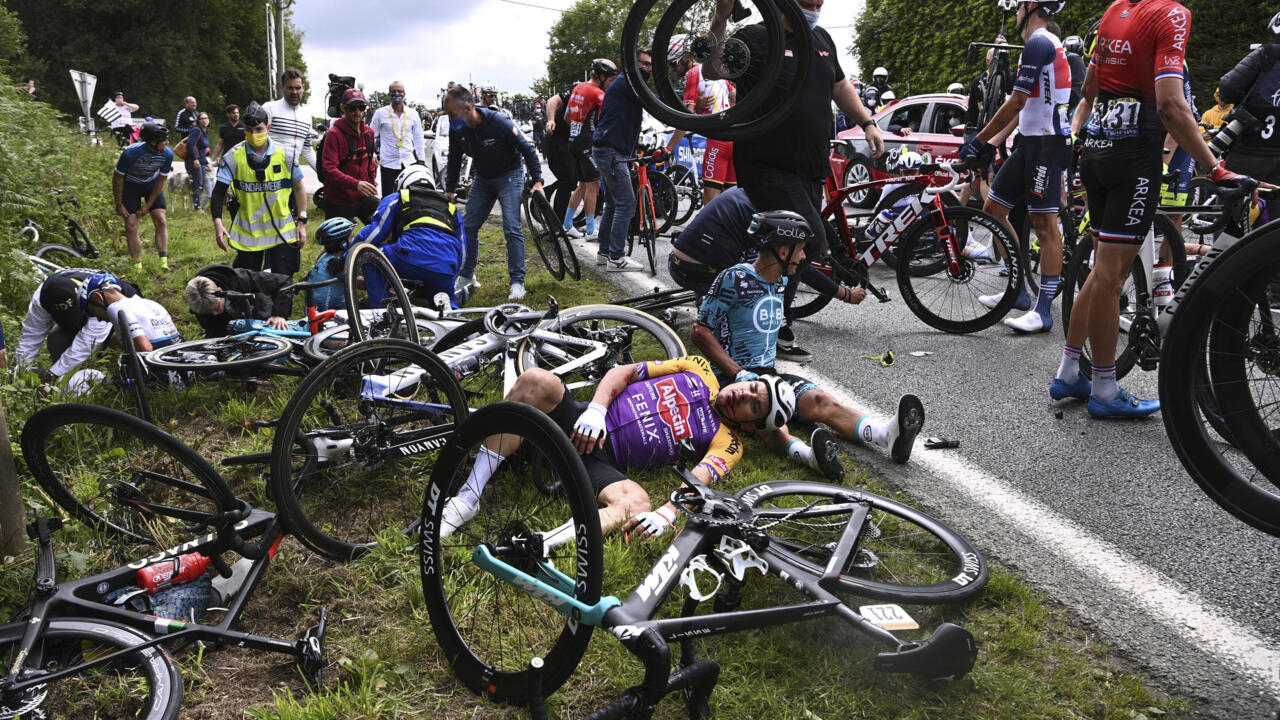 French police on Sunday launched an appeal for witnesses on the giant accident that marred the opening stage of the Tour de France, caused by a spectator who leaned into the path of the peloton at high speed while holding up a sign .

The woman held up a sign with “Granny and Grandpa” written in German and stared down the road towards the race motorcycle cameras, crucially, with her back to the accelerating peloton.

German rider Tony Martin brushed past her, lost his balance and fell, causing a sickening domino effect that swept through most of the field, leaving them in a tangle of bikes and bodies.

“The major issue of the Tour is road safety,” Lieutenant-Colonel JoÃ«l Scherer of the French gendarmerie told AFP on Sunday.

Another police officer told AFP that “zero fatalities” was the main objective of their mission on a Tour de France or any bicycle race.

The woman, who was wearing a yellow raincoat, staggered in horror when she realized the extent of her insanity, but then disappeared into the crowd deep by the side of the road, her sign tucked under her arm.

German DSM rider Jasha Sutterlin was the only rider to have to give up immediately as his Tour de France dream was shattered from day one.

Eight other riders had to be treated by the official doctor and a host of others were treated for scrapes, bruises and cuts caused by the pile-up.

Italian champion Sonny Colbrelli and Dutchman Wout van Aert, who crushed Martin before falling head over heels, were both favorites to win stage one.

“We are pursuing this woman who behaved so badly,” deputy director of the Tour, Pierre-Yves Thouault, told AFP.

“We are doing this so that the small minority of people who do this don’t ruin the show for everyone,” he said.


Police said when they caught the culprit they intended to charge him with “unintentional short-term injuries due to an obviously willful breach of a duty of safety or diligence,” said the Lieutenant-Colonel Scherer.

“We can confirm that no member of the public was injured and we have contacted the race organizers about this.”

The Tour left on Saturday from the Atlantic port of Brest.

Following the relaxation of French restrictions on coronaviruses, the public massively moved along the narrow roads of Brittany for a stage finally won by Frenchman Julian Alaphilippe.

“We have witnessed unacceptable behavior today with people crossing the road in front of the race and children on their own,” race director Christian Prudhomme told French media. “You come here to see heroes. If you want to see, look at yourself in the mirror.”

On Sunday, four official racing vehicles preceded the peloton, which started with fewer than three other riders who were injured in another crash later on Saturday, warning over-excited roadside fans to keep their distance.

â€œWe are telling people to stay off the road and control their children,â€ Scherer said.

Canada Goose plans to phase out fur by 2022 – will the alternative material be sustainable?