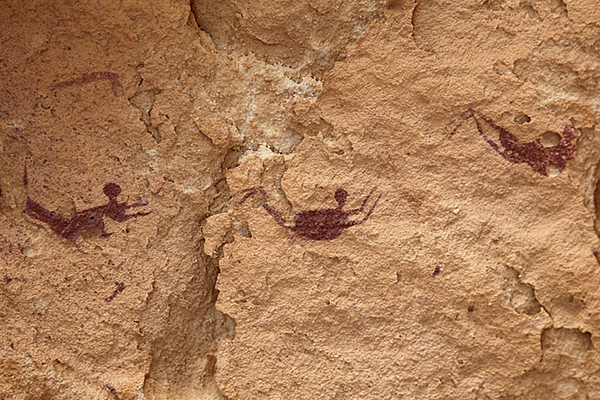 The art of swimming (excerpt)

Bill Hayes is the author of how we live now, sleepless townand The anatomist, among other books. Hayes is a recipient of a Guggenheim Fellowship in Nonfiction and a frequent contributor to the New York Times. His latest book, Sweat: A History of Exercise is now available from Bloomsbury.

From the Cave of the Swimmers, Wadi Sura, Egypt. PhotoRoland Unger, CC BY-SA 3.0

Aristotle, in the 4and century BC, observed that it was “not inappropriate” to compare swimming to running. And it’s true, we could do a sort of count of body parts and see that each is engaged while swimming: eyes, mouth, nose, lungs, heart, shoulders, chest, arms, hands, neck, back, abdominal muscles , buttocks, legs, feet.

“Swimming can make a person lean, improve breathing, firm, warm and thin the body as well as make a person less susceptible to injury,” Italian Renaissance physician Girolamo Mercuriale pointed out in his 1573 treatise. From the art of gymnastics. Moreover, he felt that swimming provides “more pleasure” than other types of exercise, “since the movement of water…produces by its soft touch a special kind of pleasure all its own.”

Spoken like a real swimmer. I like this phrase special pleasure, how he recognizes the frankly sensual nature of swimming and the relationship – if that’s not too strange a word to use – that one develops with water. The environment in which the swimmer swims makes it unique among exercises and particularly satisfying.

But the embrace of water can change as quickly as the weather. As with fire, there is always an element of danger and unpredictability with water, whether swimming in a lake, river, ocean, pond or pool, which places swimming in a different category from other forms of exercise. That’s not to say the risks aren’t inherent in running, weight training, rock climbing, cycling, martial arts, or yoga, but they’re usually injuries from overuse (muscles pulled, torn tendons), equipment failure, or perhaps an overzealous opponent (a boxer’s black eye). And cases of so-called “death by exercise” — when someone drops dead while, say, jogging — are usually due to pre-existing (though often unknown) medical conditions such as atrial fibrillation.

With swimming, on the other hand, your life depends on knowing how to do it. There can be a very real risk of drowning, accidents – being overtaken by a strong current and swept out to sea, or swept away by a rogue wave – no matter how good a swimmer you are. While parents teach their children to ride a bike just for fun, for the sense of freedom and independence it provides, swimming is taught primarily as a basic safety measure. It is the duty of a parent.

It was the same thousands of years ago.

Our earliest recorded evidence of swimming comes from a group of cave paintings created during the Neolithic period, dating to around 10,000 years ago. The pictographs, found in a cave in southwest Egypt near the Libyan border, appear to show swimmers in different phases of a swim – to me it looks like the breaststroke. At the time when they were painted, the climate was more temperate in this part of the world; there were lakes and rivers where now there is little more than desert. Archaeologists have postulated that the scenes depict an aspect of daily life, a time when survival depended on knowing how to swim. One was swimming to reach the other side of a body of water – perhaps in search of food, perhaps to flee a warring tribe, perhaps to move to safer ground – and the other was simply swimming for food: to catch fish.

Among the Greeks, it seems that everyone, man, woman and child, was expected to know how to swim, which makes sense since most people lived near water. As Plato observes in Laws, not knowing how to swim was considered as much a sign of ignorance as not knowing how to read. Socrates said it more clearly: swimming “saves a man from death”. Parents taught their children, and presumably the children learned from each other. The same obligation was verified for many centuries in Judaism. As stated in the Talmud (Kiddishin 29a), parents should teach their children three essential things: Torah, how to earn a living and how to swim.

A similar perspective was true in ancient Egypt, where most people lived on the Nile or one of the canals branching off from the river. The ability to swim was a matter of life and death for fishermen or boatmen, and a mark of a good education for the upper classes. In Greece and Egypt, however, swimming was not part of the events of the games or athletic demonstrations (swimming did not become an Olympic event until the advent of the modern games in 1896). The exact reason why this would happen is of course never stated in ancient texts or hieroglyphics – nor would we feel compelled to justify today why walking is not in the Olympics. I feel like swimming was seen more as a utilitarian skill – “the sporting equivalent of the alphabet,” as historian Christine Nutton put it; since almost everyone could swim, including women, this was outside the male-only framework.

Also, swimming was not a spectacular event, like ancient Greek or Roman boxing or pankration. And unlike sprints or field events, with their displays of speed and strength, it was not conducive to spectators. Although swimming may not have been a competitive event, its value as a comprehensive exercise was apparently appreciated. The ancient historian Pausanias and the writer Philostratus both noted that the four-time Olympic boxing champion Tisandrus supplemented his training in the gymnasium with long-distance swimming: in the words of Philostratus, “his arms carried him for great distances across the sea, dragging down both his body and themselves.

Actual swimming instruction manuals did not begin to appear until the 16and century. The first of these, a stilted dialogue in praise of swimming entitled Colymbetes and written in Latin by the Swiss humanist Nicolas Wyman, prior to Mercuriale Gymnastic by three decades. Wyman cared about teaching lifesaving techniques – holding on to the victim while swimming with a free arm.

It was only fifty years later, in 1587, that the Englishman Everard Digby fully treated the subject in Natandi art (The art of swimming). Digby, neither a doctor nor an athlete per se, was inspired by the work of an academic colleague from St. John’s College in Cambridge, the poet and teacher Roger Ascham. Ascham’s 1545 treatise on archery, Toxophile (The bow lover), was the first of its kind – a step-by-step guide to longbow shooting that also aspired to be a work of literary merit, written not in Latin but in plain English. As Ascham pointed out in his introductory remarks, “many English writers did not, but the use of strange words, like Latin, French and Italian, make all things dark and harsh” .

While Digby modeled his work on that of Ascham, focusing on a single form of exercise, he persisted in making things “dark and harsh” and inaccessible by writing in scholarly Latin. Almost a decade later, poet Christopher Middleton translated Digby’s Natandi art in English; this version, reprinted numerous times and also translated into French, would remain the standard text on swimming in the Western world for another 300 years. All things considered, it’s not bad; it goes beyond Wyman’s lifesaving techniques and makes the case for swimming as an art and science worth studying. Instructions are included for breaststroke, dog paddle, water overlay, and more.and century). If anything, Digby goes too far, gets too imaginative. For example, he recommends a kind of backstroke pedicure that seems as ridiculous as it is dangerous. Speaking of a hypothetical student, he writes: “Swimming on his back, let him raise his left foot and put it on his right knee, always keeping his body very straight, and holding a knife ready in his hand straight, he can easily hold his leg until he has parried one of his toes, like so. One has to wonder if Digby has actually tried this, or even swum at all.

Excerpted with permission from Sweat: A History of Exercise (Bloomsbury, 2022).