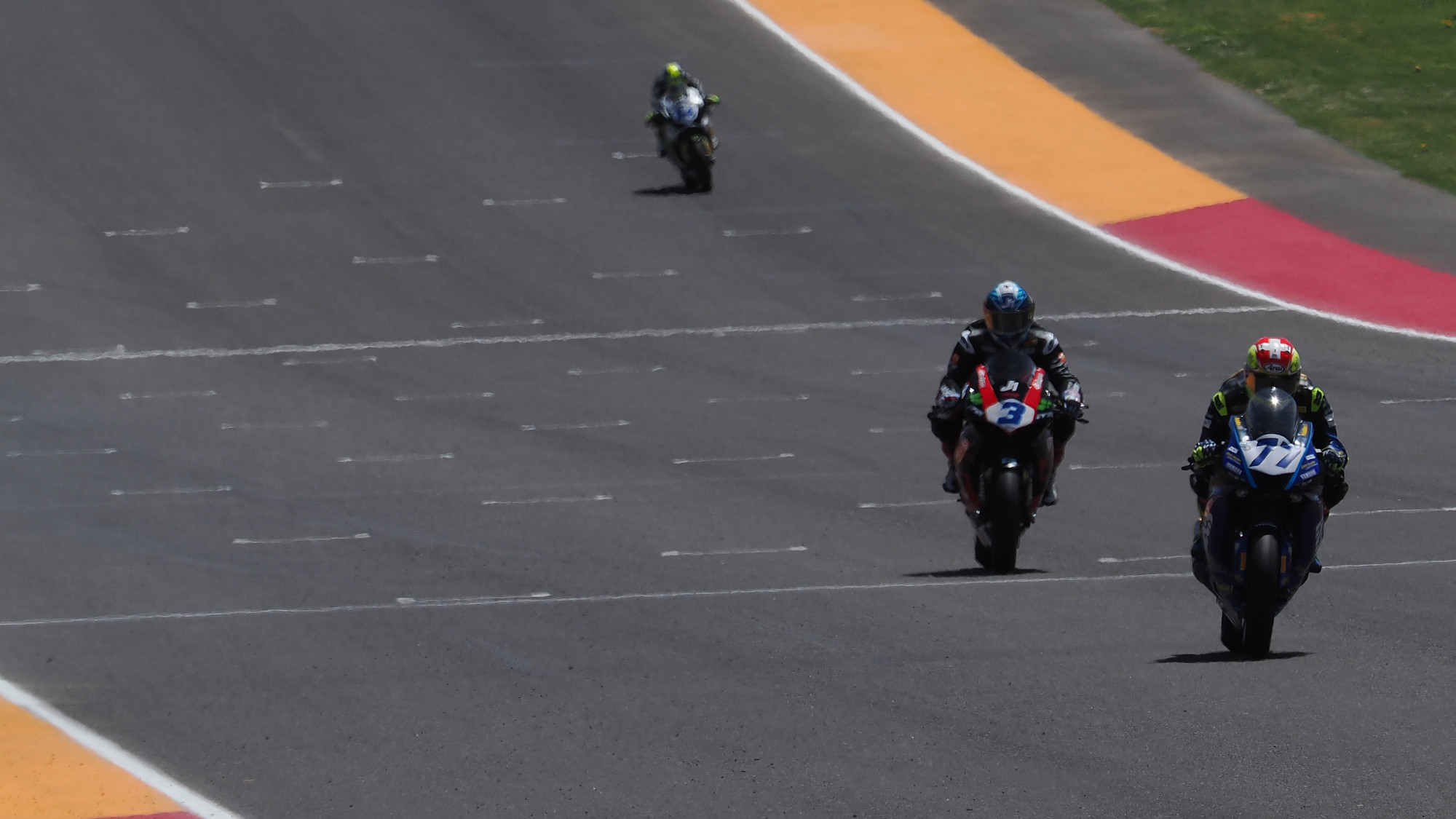 It was a case so close and yet so far for Raffaele De Rosa (Orelac Racing VerdNatura WorldSSP) in the FIM Supersport World Championship at Circuito San Juan Villicum for the Motul Argentina round as he was denied victory by Dominique Aegerter (Ten Kate Racing Yamaha) on the final lap. With the results from Race 1, Aegerter extended his Championship lead to 63 points with a hard-fought victory in Argentina.


DECISION ON THE FINAL ROUND: Aegerter denies De Rosa

The Swiss driver Aegerter had run in third place throughout the second half of the race, but was promoted to second on lap 17 of 19 when Federico Caricasulo (Althea Racing) ran wide, which cost some seconds to the Italian driver when he missed a gear. . This allowed Aegerter to target De Rosa up front and the defending champion duly did so by closing the plug and getting into position to use the slipstream on the long backstretch.

Aegerter moved through Turn 8 while using draft, despite De Rosa’s initial start under acceleration, and was able to extend his lead to nearly three-tenths of a second by the end of the race. Aegerter claimed his 14e victory of the 2022 season, putting him level with Jules Cluzel (GMT94 Yamaha) on 24 victories for his WorldSSP career, while De Rosa took second place and his 19e WorldSSP podium. Caricasulo recovered from his mistake to take third place and 24e of his WorldSSP career.


HOPE FOR PROGRESS SUNDAY: a gap to close

Can Oncu (Kawasaki Puccetti Racing) fought back after a disappointing Tissot Superpole session to take fourth place and strengthen his hold on third place in the standings, with the Turkish star steadily climbing places throughout the race. Finnish driver Niki Tuuli (MV Agusta Reparto Corse) finished fifth after an eventful race, finishing just over two seconds behind Oncu in fifth place. Jules Cluzel (GMT94 Yamaha) was another who had a bumpy ride as he looked to extend his unbeaten streak in San Juan but could only finish in sixth place.


TO COMPLETE THE TOP TEN: a roller coaster race…

It was almost rinsed and repeated for Stefano Manzi (Dynavolt Triumph) as he worked his way through the field as seen so often this season, but he ran wide on lap 8 and fell back in order for finish in seventh place. He was only a second behind Cluzel but was only half a second ahead of Yari Montella (Kawasaki Puccetti Racing) in eighth place. Lorenzo Baldassarri (Evan Bros. WorldSSP Yamaha Team) finished ninth in his first WorldSSP race in Argentina, with Race 1 results putting Baldassarri 63 points ahead of Aegerter in the standings. Hannes Soomer (Dynavolt Triumph) completed the top ten by putting late pressure on Baldassarri in the closing stages of the race.

Rookie Nicolo Bulega (Aruba.it Racing WorldSSP Team) was 11e and around 1.5 seconds behind the top ten as he finished outside the top ten for the first time in the four races he has finished. Hungarian rider Peter Sebestyen (Evan Bros. WorldSSP Yamaha Team) took 12e ahead of Tom Booth-Amos (Motozoo Racing by Puccetti) for his first race with his new team, while it is also the team’s best result this season. Rookie Bradley Smith (Ten Kate Racing Yamaha) was 14e at its beginnings ; Smith was penalized by falling three places on the grid after the Superpole session for slow driving. Oli Bayliss (BARNI Spark Racing Team) was the last points scorer with 15e place during his first visit to Argentina. Ondrej Vostatek (MS Racing Yamaha WorldSSP) was 16e while Patrick Hobelsberger (Kallio Racing) was the last of the drivers classified in 17e.


CLEANING: to be noted from WorldSSP Race 1

Glenn van Straalen (EAB Racing Team) was the first to retire from the race after the Dutchman had an incident with Oncu on the first lap of the race, with van Straalen getting off his bike at the exit of Turn 7; Oncu was able to continue. Marcel Brenner (VFT Racing) was the second retired from the race, leaving the race around mid-stage, while Andy Verdoia (GMT94 Yamaha) brought his bike back to the pits on lap 12 of 19. Rookie Adrian Huertas ( MTM Kawasaki) had been in contention for the points but retired on lap 13 when he brought his bike to the pits. Luca Bernardi (CM Racing) retired with a technical problem on lap 17.

ZOOM: WHAT GODARD TEACHES US – Journal