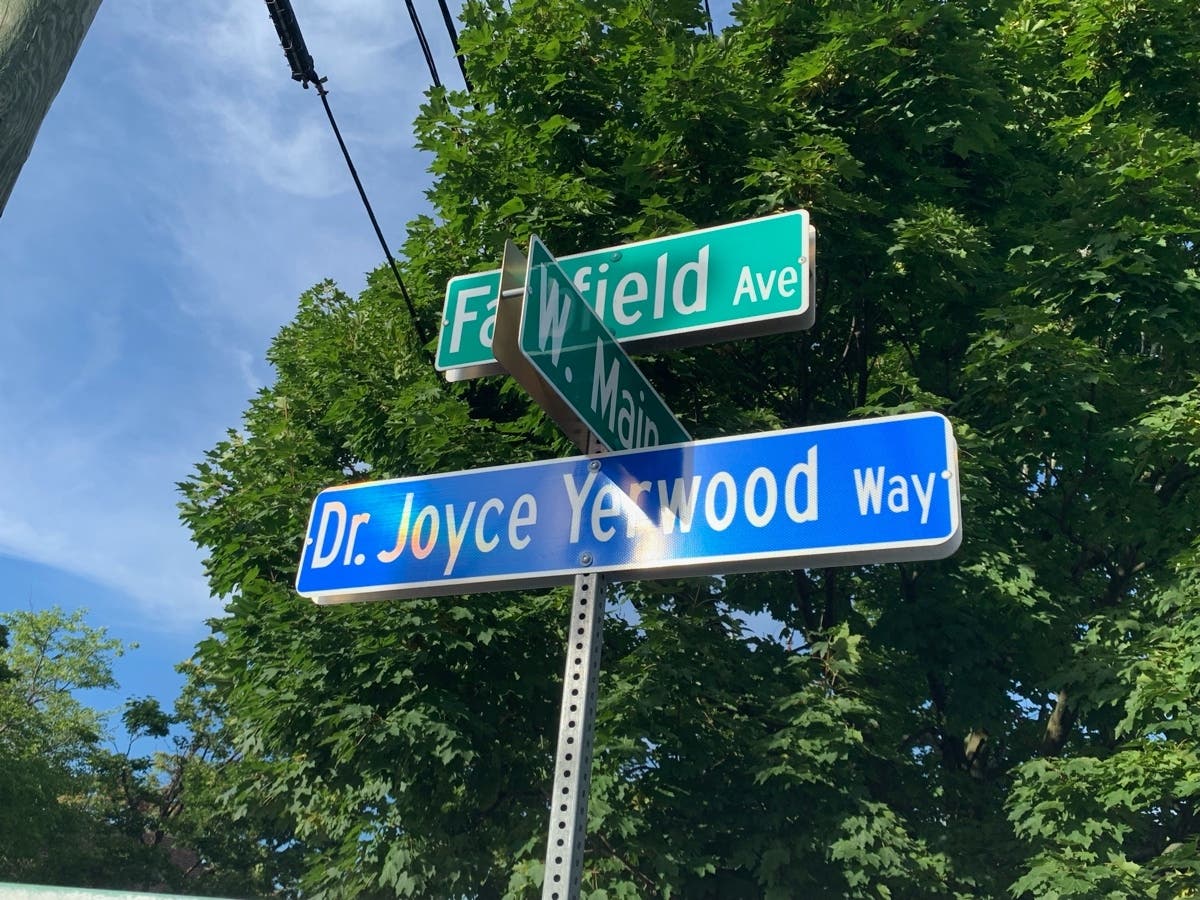 The name change became official on Tuesday, as the Stamford community gathered at the corner of West Main Street and Fairfield Avenue to unveil the new street sign.

Dr. Joyce Yerwood has been an influential figure at Stamford for decades. She was born on January 5, 1909, in Victoria, Texas, and attended Samuel Huston College and graduated from Meharry Medical College in 1933.

Throughout her career at Stamford, Yerwood helped deliver over 2,000 babies and was dedicated to providing quality medical care to low-income women, children and families until her retirement in nineteen eighty one.

Yerwood was active in the effort to revitalize the west side of Stamford and worked to improve the neighborhood. She founded the Stamford Negro Community Center in 1943, which later became the Yerwood Center in 1975. The building now houses the Boys & Girls Club.

Yerwood, who is a member of the Connecticut Women’s Hall of Fame, died in 1987.

Joyce Carwin, Yerwood’s granddaughter, was at the unveiling ceremony Tuesday with her son and spoke briefly.

Mayor Caroline Simmons said she is proud and grateful the city has decided to come together and honor Yerwood’s legacy.

“What an incredible transformational leader. What a trailblazer and what an impact she had on our community. She dedicated her life to helping those most in need,” Simmons said. “We hope this sign will be a tribute to his legacy and also an inspiration to all who pass by, whether walking or driving past this sign and see this name as an inspiration to carry on his legacy.”

Stamford resident Jere Eaton, who grew up on the West Side of Stamford, helped lead the movement. She spoke with representatives in March about the idea, which had been in the works for several years.

The resolution was approved a few months later in June.

“I’m so lucky to be here to pay tribute to one of my childhood heroes,” said Eaton, who cycled to the Yerwood Center as a child in the late 1970s. Let’s make sure to keep his memory alive. A person like Dr. Joyce Yerwood deserves to be honored and known forever.”

The Yerwood Center, which is just off Dr Joyce Yerwood Way, was the first center for African Americans in Stamford.

Joyce Griffin, former director of the center and the NAACP, spoke on Tuesday about the significance of the building.

Griffin said the community must work to maintain the center’s history in the future.

Two members of the Council of Representatives who introduced the name change resolution also spoke on Tuesday.

“I’m so glad this street is named after him,” Baxter said. “I hope his legacy lives on in the community, and that the center comes back to us, and we can use it again for the community and the neighborhood, because we need something that belongs to us. We will work with diligence to have it done.”

Adams said the new street sign will have a lasting impact.

“I think anyone who passes by and sees this sign, they’ll either know who she is and have some appreciation, or they’ll search for who she was,” he said.

The resolution that was passed states that the memorial name will expire 25 years from the date of the resolution, unless renewed for another 25 years by three quarters of the members of the Board of Reps.

Get more local news straight to your inbox. Sign up for free newsletters and patch alerts.

Billy Pie closes on Patterson Avenue in favor of Manchester