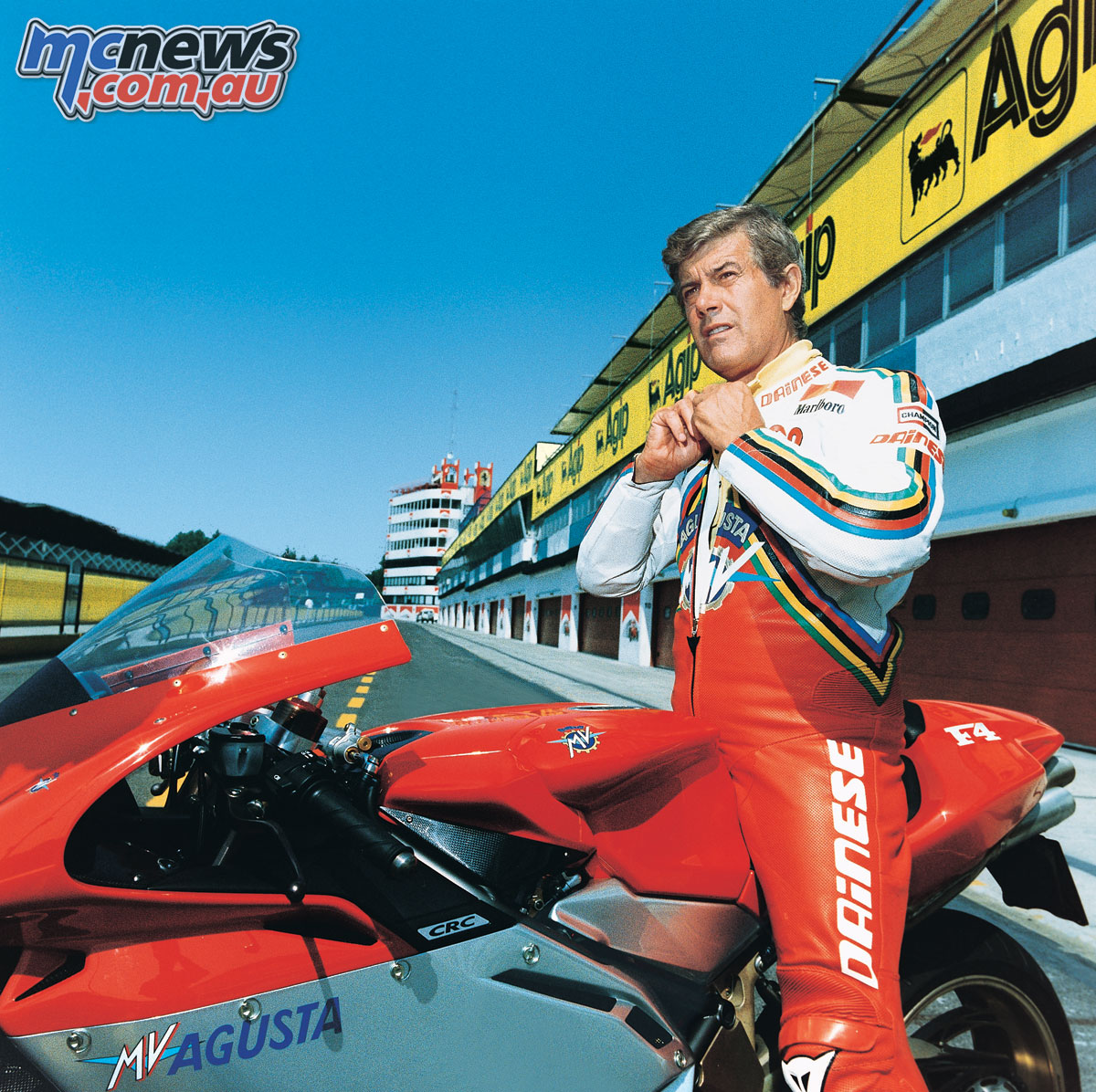 When MV Agusta closed in 1977, it marked the death of Italy’s premier motorcycle brand. Between 1952 and 1976, MV won 37 world titles and scored 270 Grand Prix victories, a feat unmatched at the time. In 1978 Claudio and Gianfranco Castiglioni of Cagiva took steps to acquire the MV name but those talks fell through. The factory was dismantled soon after and in 1982 the company went into liquidation.

Things moved slowly in Italy and it was only a decade later, in the spring of 1992, that the Castiglioni finally managed to acquire MV Agusta. At the time, the Castiglioni owned Cagiva, Ducati, Morini and Husqvarna, and operated from the former AMF-Harley-Davidson Aermacchi premises in Schrianna, on the shores of Lake Varese. Massimo Tamburini headed Cagiva’s design department, the CRC (Cagiva Research Center), located in San Marino.

Tamburini came to Cagiva from Bimota (the “Ta” in Bimota), and at the end of 1992 was in the final stages of finishing the Ducati 916. But after the 916 was finished, Tamburini was sick with a tumor to the stomach and it wasn’t until 1995 that he could embark on the next production bike project; the four-cylinder F4.

Andrea Goggi, an engineer with Cagiva since 1988, was entrusted with the redesign of the liquid-cooled F4 engine. With oversquare dimensions of 73.8 x 43.8 mm and a central chain drive for the double overhead camshafts, the layout was different from Japanese four-cylinder engines of the time which featured cam chain drives lateral.

The cylinder block was sand cast as a separate entity and angled forward 20 degrees. This provided for nearly vertical 46mm throttle bodies for Weber-Marelli electronic fuel injection. Another unusual feature was a crankshaft-driven reduction gear that allowed for smaller cam gears.

This reduced the size of the cambox, but the cams rotated rearward and required a front-mounted cam chain tensioner. Another unique feature was the radial four-valve-per-cylinder layout. The included valve angle was a narrow 22 degrees, with the valves angled outward by 2 degrees.

The cassette-style six-speed gearbox was sourced from the 500cc Cagiva Grand Prix racer, the main drive was by straight-cut gears and the clutch a wet multi-disc. Tamburini designed the 4-2-1-2-4 exhaust system, with particular emphasis on the four rear tailpipes.

He wanted it to sound like music. “They look like organ pipes. Just like I like to listen to Pavarotti, I like to listen to the enginesaid Tamburini. The pistons provided a compression ratio of 12:1 and the 749.4 cc four-cylinder engine produced 126 horsepower at 12,200 rpm.

Avoiding the popular aluminum beam frame, Tamburini preferred a composite chassis layout. This included a chrome-molybdenum tubular steel upper section wrapping around the narrow engine and bolted to cast magnesium rear uprights. These also served as the engine cradle and pivots for the single-sided magnesium swingarm. Eccentrics on the steering head bearings provided adjustable steering geometry, while alternate mounts for the Sachs shock allowed the rate of climb to be chosen.

The suspension, wheels and brakes have all been designed specifically for the F4. The inverted 49mm Showa fork incorporated quick-release axle clamps and the brakes were designed in cooperation with Nissin. Along with 310mm floating discs, the front calipers featured six pistons of different diameters.

At the rear was a 210mm disc with four-piston caliper. Marvic supplied the 3.50 x 17 and 6.00 x 17-inch magnesium wheels and Tamburini commissioned Pirelli to supply a special 120/65ZR17 EVO front tire to match the 190/50ZR17 rear. To complement a rigid chassis spec, large diameter axles, 35mm front and 50mm rear.

The F4’s styling was another Tamburini triumph. Like the Ducati 916, small poly-ellipsoidal headlights dominated the frontal aspect. The final design placed the twin headlights one above the other in the center of the fairing.

According to Tamburini, “Center lights are easier to control, allow for a more compact fairing and simplify worldwide homologation.” The 184 kg F4 750 Oro was completed with a carbon fiber body, an Öhlins transverse steering damper and adjustable footpegs and levers (via eccentrics).

The instrumentation was decidedly modern, with a digital speedometer and an analog tachometer. Rolling on a short 1,398mm wheelbase, the F4 750 Oro promised exceptional agility and stability, with a claimed top speed of 275km/h.

The F4 Oro was originally unveiled at the Milan Motor Show in September 1997 and appeared in the Guggenheim Art of the Motorcycle exhibit in late 1998. Production of three a day began in mid-1999 and at the end of the year, delivery of the limited edition run of 300 pre-ordered copies was complete.

Unfortunately, since it took so long to develop by the time the F4 Oro was released, it was probably already outdated. In 1999, the Japanese 750s were lighter and more powerful. But that didn’t worry potential F4 Oro buyers, most of whom would never drive them.

Many Oros entered the collections of celebrities, including King Juan Carlos of Spain, Jay Leno, Giacomo Agostini and Max Biaggi. A handful arrived in Australia, then imported by former racing champion Paul Feeney. And while MV Agusta has released many limited editions since 1999, the F4 750 Oro stands alone. The F4 Oro heralded the resurrection of MV Agusta and remains the most collectible of the next generation MV Agusta.

What happened to the 10 wonders he propelled to stardom in 2015?