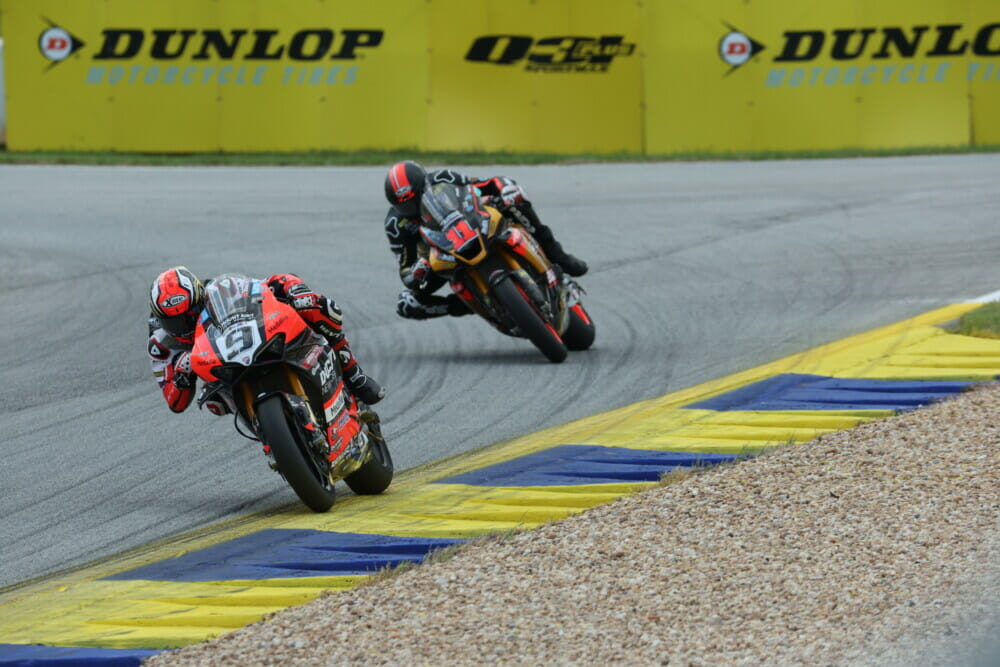 Fresh N Lean Progressive Yamaha Racing’s Jake Gagne looked to be having the same kind of ride he had 17 times last year in the first of two MotoAmerica Medallia Superbike races at Michelin Raceway Road Atlanta on Saturday. He had started from pole position after breaking the track record in qualifying, he led into the first corner and he seemed to be settling into the kind of pace that no one else was going to match. Everything was going to be planned. Until the point where it was not. Gagne crashed his Yamaha YZF-R1 out of the lead on lap six of turn five, giving Warhorse HSBK Racing Ducati NYC’s Danilo Petrucci a third straight win.

Petrucci, however, did not have it easy as Westby Racing’s Mathew Scholtz applied pressure throughout the race on the former Italian MotoGP winner. Once he passed fellow South African Cameron Petersen, Scholtz was able to cut Petrucci’s lead and even reduce it to less than a second. But he couldn’t get close enough to strike and Championship points leader Petrucci was able to close the game with another near flawless performance.

Petersen, meanwhile, added to Team Yamaha’s misery on Saturday in Georgia when he crashed out to third place just two laps after Gagne’s error.

Scholtz knows Petrucci has a small advantage at this stage and he hopes a few tweaks to his Yamaha YZF-R1 overnight will bring him closer to the front on Sunday. However, he is having a good start to the season with three second places.

With Barbera fourth, fifth went to Vision Wheel M4 ECSTAR Suzuki’s Richie Escalante with the former Supersport champion fighting back after an off-track excursion on the opening lap.

Kyle Wyman found out on Friday that he would replace PJ Jacobsen on the second Tytlers Cycle Racing BMW when Jacobsen was forced out at the weekend after testing positive for COVID-19. Wyman took advantage of the opportunity and finished sixth, barely edging out teammate Corey Alexander on another Tytlers Cycle/RideHVMC Racing BMW.

With his third consecutive victory, Petrucci now leads Scholtz by 15 points going into Sunday’s second race. Lewis is third in the title chase with 36 points, three better than Barbera’s 33. Escalante rounds out the top five with 31 points. Gagne, the defending series champion, is now 59 points behind Petrucci after three races.

Saturday’s star races got off to a strong start with Corey Alexander taking pole in the weekend’s only Yuasa Stock 1000 race, but it certainly wasn’t easy. The Tytlers Cycle/RideHVMC Racing Kawasaki rider had his hands full from start to finish, first with crashed veteran rider Geoff May and then with Cycle World/Octane/Chuckwalla Racing’s Michael Gilbert. Alexander and Gilbert battled it out, especially in the closing laps, and the pace picked up which made the final lap a barn burner. Seeking a way around Alexander and taking the lead, Gilbert made a brave inside pass on the final corner and nearly held on to take the ladies. Instead, Alexander prevailed in a photo-finish and took the win by 0.001 of a second.

Former Georgia resident Josh Herrin had the best kind of reunion with Peach State on Saturday at Road Atlanta. The Warhorse HSBK Racing Ducati NYC rider, who returned to the Supersport class after several years of Superbike racing, earned his first middleweight class victory since 2015. The poleman got the holeshot in the 18-lap race and led from start to finish to claim the world’s first professional road race victory for the Panigale V2. Meanwhile, Vision Wheel M4 ECSTAR Suzuki’s Sam Lochoff, who is the first professional road racer to compete aboard the GSX-R750 under FIM and MotoAmerica ‘Supersport Next Generation’ rules, finished second. North East Cycle Outlet Racing Benjamin Smith completed the podium in third.

In the first race of the SportbikeTrackGear.com Junior Cup on Saturday, Belgian rider Levi Badie, who is a rookie in the category, started on pole in his first ever MotoAmerica race. The BARTCON Racing driver didn’t get off to a good start and had to settle for third place on the opening lap. Max Van took the holeshot and was in the lead, but Badie passed him on lap one, but then crashed on lap two. After that, the battle was on to see who would achieve victory. The lead changed hands several times during the 11-lap event, and Alpha Omega Kawasaki rider Cody Wyman emerged victorious, picking up his second Junior Cup victory in as many years. SportbikeTrackGear.com rider Van finished, while teammate Joseph LiMandri Jr. rounded out the podium.

Saddlemen/Lloyd’z Garage’s Cory West turned the tables on JLC Concrete/KTM/DiBrino Racing’s Andy DiBrino on Saturday at Michelin Raceway Road Atlanta with the India-ridden West beating DiBrino after the KTM-ridden Oregonian went out on a similar battle at Daytona.

Third place went to Tyler O’Hara of Roland Sands Design, who was forced to start from the back row, the Californian ahead of his Ulsterman Jeremy McWilliams.

Fresh N Lean Progressive Yamaha’s Jake Gagné suffered a tough weekend in the season-opening round of the MotoAmerica Medallia Superbike Series at Circuit of The Americas two weeks ago and on Friday in Texas its qualifying session was cut short by mechanical issues before it really started. But that was then, and this is now.
Gagne and his Yamaha YZF-R1 were up to their usual laps at Michelin Raceway Road Atlanta with the defending MotoAmerica Superbike champion finishing the opening day as the quickest of the rapids with his 1:24.247 in Q1 to place in provisional pole position.

“It was a good day,” Gagné said. “Honestly the bike feels really good and after a weird first lap weekend we are back in shape. Much like always, we are focusing on race preparation, longer runs and lap times. Preparing for the race is the priority and being in good shape there. It’s pretty good. When it gets hot in the afternoon it gets a little greasy so I think most guys would agree there is a bit more grip when riding in the morning. It’s the little things and not a big deal. Yeah, we can go faster tomorrow. I think everyone will go faster so I think we will have a softer Dunlop tomorrow morning. Like I said, the race is what matters. We’re going to do our job and focus on what we need to focus on and be ready to go.

Gagne edged Westby Racing’s Mathew Scholtz by just 0.223 seconds under sunny Georgia skies with Warhorse HSBK Racing Ducati NYC’s Danilo Petrucci third fastest on his Road Atlanta debut. Scholtz’s fastest lap was 1:24.470 on his 13and lap with Petrucci, on form after winning both races at COTA in his MotoAmerica initiation round two weeks ago, with a best time of 1:24.585.
Vision Wheel M4 ECSTAR Suzuki Jake Lewis was 1.2 seconds shy of Gagne with the fourth fastest time, the Kentuckian half a second ahead of Tytlers Cycle Racing’s Hector Barbera with the Spaniard fifth in his BMW M1000 RR.
Vision Wheel M4 ECSTAR Suzuki’s Richie Escalante, Tytlers Cycle/RideHVMC Racing’s Corey Alexander and ADR Motorsports’ David Anthony rounded out the top eight.
The Wyman brothers were next with Travis leading Kyle by just 0.001 of a second to ninth on the provisional grid in his Tytlers Cycle/RideHVMC Racing BMW. Kyle Wyman, meanwhile, rides in place of PJ Jacobsen with the New Yorker testing positive for COVID-19.

Tytlers Cycle/RideHVMC Racing’s Corey Alexander clocked a 1:26.470 to lead Q1 in the YUASA Stock 1000 class with Disrupt Racing’s Hayden Gilim second and Vision Wheel/Discount Tire/KWS’ Geoff May third.
Warhorse HSBK Racing Ducati NYC’s Josh Herrin had a big crash in Supersport Q1 but still managed to hold on to provisional pole thanks to his 1:29.430, which put him 0.110 seconds ahead of North’s Benjamin Smith East Cycle Outlet Racing. Landers Racing’s Rocco Landers finished day one in third place with class rookie and non-defending SportbikeTrackGear.com Junior Cup Champion Tyler Scott fourth fastest. In post-qualifying technical inspection, however, Smith’s Yamaha was DQd, moving everyone up one spot.
Twins Cup Q1 was tight at the top on day one with Veloce Racing’s Jody Barry edging Robem Engineering’s Teagg Hobbs by just 0.003 seconds with the top six on the same second – Cycle Tech’s Hayden Schultz, Robem Engineering’s Benjamin Gloddy, Rodio Racing / Anthony Mazziotto of Warhorse HSBK Racing and Cory Ventura of MP13.
In the SportbikeTrackGear.com Junior Cup action, it was Cody Wyman at the controls, with the Alpha Omega-backed rider leading Max Van by 0.928 seconds in Q1.

Interroll and ENGEL on the way to a self-optimizing machine