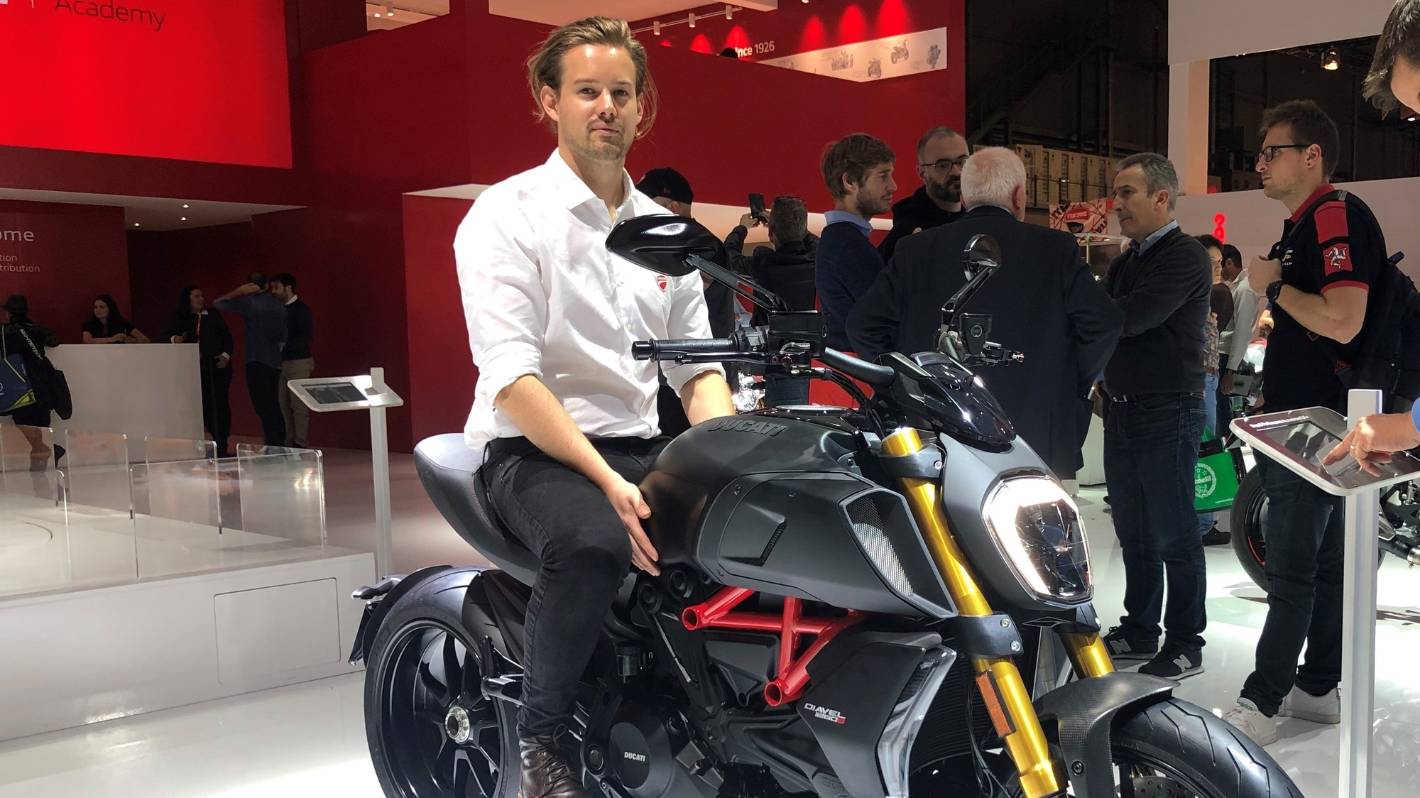 In a quiet room not far from the factory, five designers chat in their best Italian, pointing with graphite-stained fingertips at designs of motorcycles.

They admire the subtle design, the flowing lines, everything that makes them a Ducati.

One of the men turns to his colleague and asks him in awe, “So when do you make us the next Britten?”

He talks to Sam McCafferty, a 29-year-old Wellingtonian who landed one of the best design gigs in the motorcycle world and has just led his first project as lead designer of the Ducati Streetfighter V2.

It is one of the major influences of McCafferty’s design. â€œYou know, the V1000, I get talked to all the time here. It’s a pretty big shadow to live under, to be honest.

â€œThis is the pinnacle. It’s the pinnacle of motorcycle design, it’s still well regarded. I’m not sure they can expect that from me, but hopefully someday I will get close.

Growing up, it was the cars and the design of cars that excited McCafferty. His father loved cars, and they even named the Enzo family dog, after the founder of Ferrari.

Motorcycles were cool, McCafferty says, but the farthest thing from his mind when he rode a push bike through the streets of Eastbourne, a suburb of Lower Hutt.

After attending Hutt Valley High School, then aged 17, he moved to Auckland to study at Massey University, focusing on industrial design.

In his sophomore year he returned to Wellington, still studying at Massey, when an opportunity presented itself that he couldn’t pass up.

Honda did sponsor a design class for fourth-year students, and McCafferty wanted to participate.

â€œI managed to get Massey to let me in, which was nice of them,â€ McCafferty says. â€œThe winner of this article got an internship at Honda R&D Europe in Rome, so I pushed really hard on this project.

McCafferty went on to win the internship, despite being a sophomore, then spent nine months in the company’s motorcycle arm in Italy.

After the internship he returned to Massey and then worked for 18 months at a company in San Diego.

When his visa expired and returned to New Zealand, McCafferty caught Ducati’s attention with designs he posted on his Instagram page.

â€œI remember that. In fact, my current boss added me on Linkedin and I saw him at around four in the morning because I was jet-lagged after I got back from America.

â€œI accepted it, then he asked me if he could call me right away. So I took a call from him around 4.30am, I must have shaken sleep out of my eyes. But he asked me if I was free and if I could come here for an interview.

â€œI was like, I’m in New Zealand. And he said, it’s okay, just send me the flights and I’ll see what I can do. So I gave him a few options, one the next day, one every five days, and he told me to take a flight the next day.

Two days after the initial call, McCafferty was in Bologna and about to accept a designer job for Ducati.

He is part of a team of five designers, plus the chief designer, who develop the offer of Ducati motorcycles.

Usually, designers come up with all the design ideas for upcoming bikes, and the company’s general manager, Claudio Domenicali, and the design manager select their designs before choosing one to move forward.

The winner becomes the main designer of this bike.

In this case, McCafferty has been selected to lead the design of the new Streetfighter V2, which will be released in early 2022.

While the Britten is frequently mentioned in Ducati offices, McCafferty says the company has certain design philosophies and that he tried to take inspiration from two particular Ducati classics with his Streetfighter V2 design.

The Streetfighter V4, released last year, has a more brutal shape and looks like a bicycle beast, he says.

â€œThe idea was to try and create something that has what we call the family feeling of the range, but I was using a fuel tank from the Panigale, which is a much softer design style. used this to create a smoother, a bit softer, a bit sleeker, and more agile bike.

It’s an aggressive yet sleek design, with flowing diagonal lines from front to back and a striking red paint job to help it stand out.

The process of turning the design of a series of drawings into a complete and functional motorcycle is a long one, but extremely satisfying for McCafferty.

He says the designs are turned into a 3D computer simulation first and then tweaked slightly. A life-size clay model is then made and the design is perfected, with test pilots sitting on what is essentially a sculpture and explaining what works and what doesn’t.

Once finalized, the clay sculpture is mapped in 3D and placed back into the computer, then prototypes are assembled to be tested on the track.

Further adjustments are made after feedback from test pilots.

â€œFor example, the swingarm, which is the part that holds the rear wheel to the back of the bike, on the Streetfighter, is 16mm longer to improve stability and handling.

â€œAs a designer, you get these reports every week, and they’ll ask you things like, we need to lengthen the swingarm a few millimeters. And then we need two or three more millimeters.

â€œSo while people won’t notice the difference with, say, the Panigale at a glance, I had to work with the engineers to find that extra 16mm at the rear. These testers can feel the millimeters in these bikes, so it’s really cool to read their reviews.

While the bike is finished and ready for the ride, McCafferty is yet to test his own creation.

This will have to wait until he obtains an Italian motorcycle license.

At the moment, he walks or bicycles the 10 minutes to get to work, as his New Zealand and US driver’s licenses are no longer recognized by the Italian authorities.

“[Ducati] are really good at giving you bikes, but unfortunately at the moment I cannot ride with my New Zealand license. I have to take my Italian license, but the problem is that everything is in Italian. I could probably do it, but it’s like 1000 euros [NZ$1600], and I don’t know if I want to try this until I’m really sure.

Other Kiwis may have the chance to ride the Streetfighter V2 before its designer, but McCafferty had some advice for this journalist, or anyone looking to test drive the newest Ducati.

â€œIf you do it in Wellington make sure it’s not a windy day. I know what it is, and it’s no fun. You will appreciate it more without the wind.