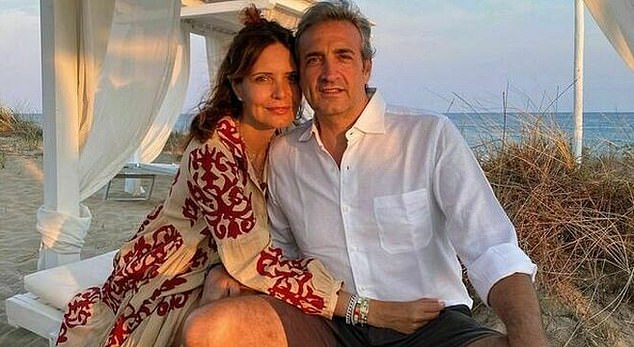 A famous Italian broker accused of stealing 500 million euros from his clients, including Tottenham manager Antonio Conte mysteriously dies in a motorbike accident

By Tom Brown for Mailonline

An Italian jet-set broker accused of stealing millions has been burned beyond recognition when a motorbike he was riding caught fire in Rome.

Police are investigating the mysterious accident that claimed the life of Massimo Bochicchio, 56, who was due to testify in court after allegedly stealing around 500 million euros from wealthy investors.

His list of clients includes former Italy national football team manager Marcello Lippi and former Chelsea and current Tottenham Hotspur manager Antonio Conte, who is said to have been defrauded of more than 20 million euros.

The broker attended the Circolo Canottieri Aniene sports club, one of the oldest and most notorious sports clubs in Italy, and has often boasted of being a close friend of the honorary president, Giovanni Malago.

His LinkedIn profile shows he worked at HSBC and was linked to a huge network of businesses, many of which are registered in the UK.

Police are investigating the mysterious death of Massimo Bochicchio, 56, who was killed when his motorbike caught fire and crashed the day before his court appearance.

Bochicchio’s talk of international investments earned him a luxurious lifestyle as investors handed over their money against the promise of 10% returns.

But when investors demanded to see their returns, Bochicchio left town.

He left Italy in 2020 in hiding, dodging calls and letters from his investors asking what had happened to their money.

At that time, Italy’s financial crimes department got wind that something was wrong. Tax investigators opened an investigation and seized nearly 11 million euros in assets including an alpine ski resort and a painting by Picasso.

Eventually, authorities caught up with Bochicchio.

Interpol tracked him down in Jakarta and arrested him in July 2021, bringing him home to stand trial and testify.

In addition to his legitimate clients, investigators believe Bochicchio also stole money from criminal investors who used it to launder money held in offshore accounts.

But shortly after agreeing to testify revealing details of his illicit funds, the motorbike Bochicchio was riding reportedly slammed into a wall and caught fire on June 19.

The hearing was scheduled for Capitol Court in Piazzale Clodio the day after his death, raising questions about the timing of the accident.

In another twist, a report suggested his motorcycle was on fire even before he crashed, according to the Times, sparking speculation that his vehicle may have been sabotaged.

But which of the Bochicchio affiliates could have targeted the scammer? His client list expands to include obscure celebrities and connected Italian businessmen of all kinds.

Police wiretaps leaked to Italian media in 2020 reveal that at least one of Bochicchio’s clients was waiting outside his house, making a grim promise to his life that “something is going to happen”.

“We are awaiting the results of the tests on the bike, but Bochicchio never told me that he had received threats,” said his lawyer, Gianluca Tognozzi.

His wife had filed divorce papers before her death, Il Mesaggero reported, after confessing to her sister that she could no longer bear people showing up at their house.

Other investors and affiliates have so far remained silent, but Italian investigators hope to piece together the plot even without evidence from Bochicchio.