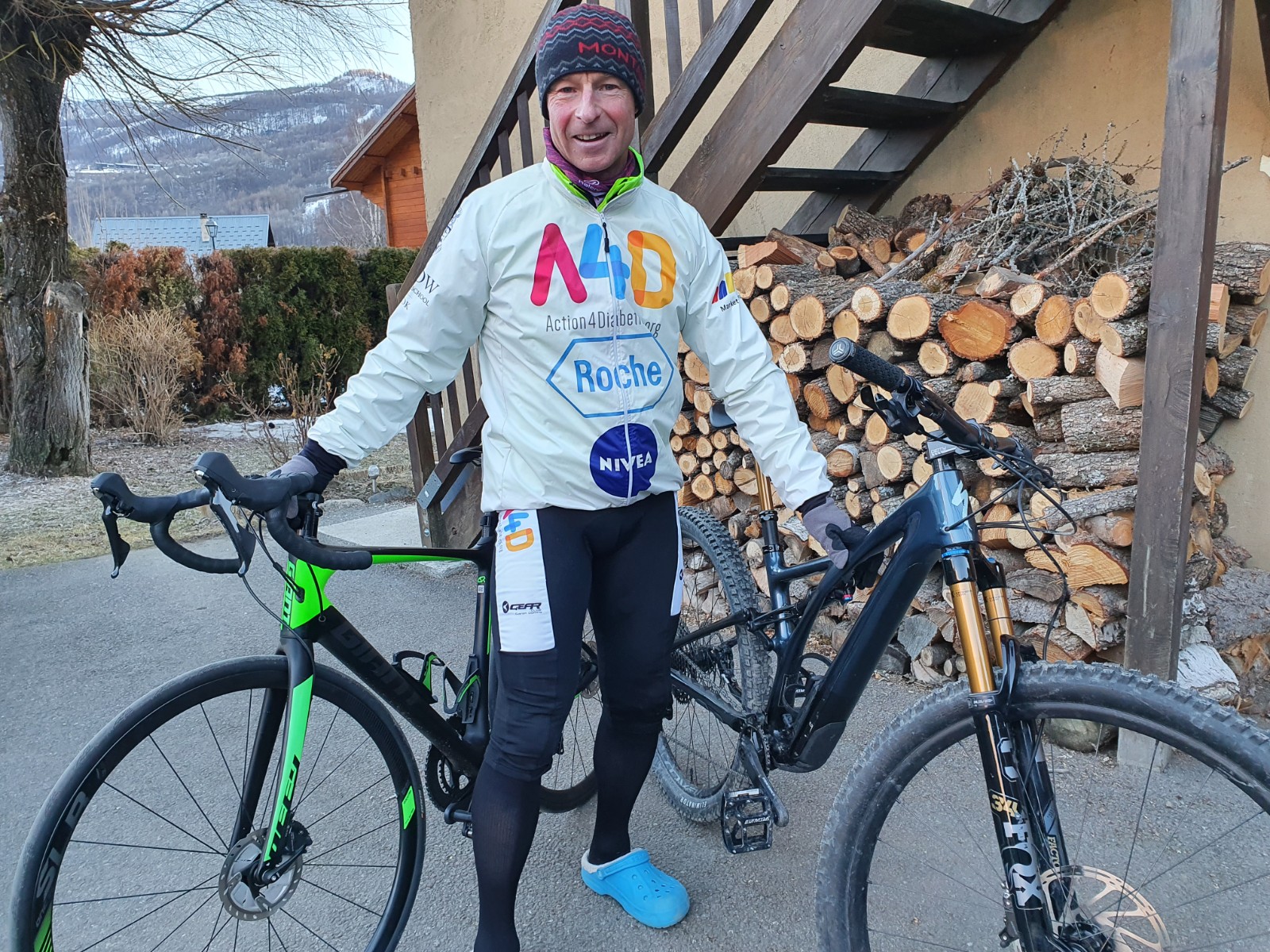 Jerry Gore, co-founder of Action4Diabeteswho supports children with T1D in seven countries, recounts a frightening and instructive experience he had while staying at a beachfront hotel on the Mediterranean island of Cyprus.

The real challenge of these 30 years of marriage was, as always, the ever-changing food we ate. My wife Jackie and I were in for a treat, as it was our first holiday together in years, and we settled into a posh beachfront hotel famous for its three Michelin star restaurants in Cyprus for a week’s stay .

I think Jackie was trying to kill me. Monday was French night, Italian Tuesday, Indian Wednesday. Then there were the “extra special” restaurants located at the hotel. In short, it was a seaside foodie party. This place was famous for its huge buffet meals – breakfast, lunch and dinner.

Luckily, I had a few tricks up my sleeve. I find daily exercise to be the one reliable thing that will always help me regulate my blood sugar. If I can do at least some basic cardio every day that gets my heart rate up for 30 minutes or more, it helps my glucose management a lot.

However, I travel a lot and every day is different. As co-founder of Action4Diabetes, which supports children with T1D in seven different countries, I am in South East Asia at least one month a year working for the charity. I am also a Himalayan mountain guide and expedition climber on new routes, and run businesses in France and the UK.

When traveling, I eat different foods almost daily. My secret is to always eat plenty of protein and fat. And avoid carbs like potatoes, bread, and rice. I eat lots of vegetables and love big salads full of tomatoes, feta cheese, onions, lettuce and nuts, normally accompanied by a nice glass of red wine.

My cycling guide that day, Marios, 26, was a typical Cypriot athlete – tall, strong and very fit for his chosen profession. He was a gifted cyclist who seemed to flow effortlessly over the dry diamond gravel paths of this sunny Mediterranean island. We had ridden together a few times before, so he knew, or thought he knew, his former diabetic client (61) from that day.

He greeted me with his usual “Ciao, Jerry” and asked if I was “ok” for the big ride – over 50 miles in arid, isolated countryside, with some rough hills along the way. path. He smiled at me, knowing that he would suffer much less than me. He was so right!

I nodded nervously, mentally checking all my supplies. Marios raced toward the early morning sun, and I ran after him, excited but dry-throated foreboding.

Almost immediately after reaching the end of the city, the land began to rise – a steep, brushy, snake-infested wilderness. Within an hour I was boiling hot and ready for a drink. Marios picked up my vibe and stopped just below a small barren brown ridge.

“Okay, Jerry?” He asked rhetorically. But I wasn’t, so I said it.

“I’m feeling a bit confused, mate. I think I’m going to do a blood test.

Fuzzy was no good. It’s the only word that comes to mind to describe how I feel when my blood sugar is high. Normally this means I have about 15 mmol/L (270 mg/dL) and need a few units of insulin. Work done. But when I saw the display on my phone, I was immediately alarmed: 25 mmol/L (450 mg/dL) – yuck!

I’ve always been told that training hard when you hit 14 mmol/L (252 mg/dL) or higher is not a good idea. I also knew that high temperatures could affect my glucose levels. But “no worries, I have Humalog”, I reasoned to myself. I realized that I needed more insulin. I hadn’t had enough for breakfast. I was injecting, continued slowly, and my blood sugar was dropping. I had trained so many times, for so many years, for such situations.

I told Marios we were going to ride hard for another 10 minutes, and if my blood sugar didn’t go down, I would inject and go from there. He agreed and we continued. But on the next test, I was at 26 mmol/L (468 mg/dL). Not good. I immediately opened the insulin pocket of my backpack to find that it was empty. It really wasn’t good.

Now I had to think calmly and clearly. I asked Marios how long it would take to get back if we only used the sidewalk or the tarmac. It counted 35-40 minutes minimum and only if we sprinted. I apologized and said, “Follow me and try to follow.” He smiled, but I was already gone.

Less than 30 minutes later, I was already back at the hotel, begging the maid to let me into my room. Jackie, my wife, was probably out swimming in the sea and wouldn’t be expecting me for hours. I injected 5 units of Humalog and ran to my friend who was waiting for me. This is, I admit, not the kind of behavior that others should follow.

“Sorry about that, mate. Now where were we? I joked.

Marios knew I wouldn’t give up and had already planned another ride. So we start right away on a beautiful winding single track. In total we covered 45 miles that day with just under 4000 feet of elevation gain. My blood sugar returned to normal and I ended the day at 8 mmol/L (144 mg/dL).

Like so many days before, I spent the day testing and experimenting regularly. I know what my body can and cannot handle, and how it reacts to different situations. It gives me a high level of confidence and an “I can do” attitude. But above all, I don’t feel like a prisoner of diabetes. And that I find very motivating.

I’m definitely not an easy partner for Jackie, but she stayed true and endured everything I threw at her, the kids and the dog! Our two daughters had to look after me while they were in the midst of severe hypos. But it’s the nighttime hypos that are the worst for Jackie.

Imagine waking up around 3 a.m. to sweat-soaked sheets, only to be confronted by a nasty, snarling monster who just happens to be your husband? It takes Jackie 30 minutes to coax a little honey sandwich into my mouth to bring my blood sugar up until I can walk to the bathroom.

I take a shower, she takes a shower, then we change the sheets and I go straight back to sleep, normally after muttering an embarrassed “Sorry, Jackie” under my breath. But his day has already started, and he is unable to go back to sleep. At one point in my T1D “career”, before continuous glucometers existed and could alert me to such impending episodes, I had three hypos a week.

Jackie is very practical. She has read many diabetes books and spoken to many caregivers in similar positions. And so, together, we plan and plan our diabetic journey through life.

My slogan is “Diabetes is NOT an excuse”. But it sure sucks sometimes. I have always been told to adapt my condition to my lifestyle, and not the other way around. And that’s exactly what I try to do every day. We only have one life, so I try to make it as beautiful as possible.

Get involved in Action4Diabetes Insulin360 Challenge:

The Insulin360 Challenge, which kicked off this month, is an endurance mountain bike trail through the French Southern Alps to bring health and hope to people with type 1 diabetes. You can virtually join the team at Insulin360 and making a difference in the lives of young people. It will also motivate you to get outside and go biking, hiking, or swimming.

Each virtual participant has the opportunity to cover the 360 ​​km course in a month, uploading the distance covered by bike, on foot or on foot. Click on this link for all the details and how to register.

Jerry Gore, co-founder of Action4Diabetes, which supports children with T1D in seven countries, and professional mountaineer, was diagnosed with type 1 diabetes in 2001. Since 2004, Jerry has…
Read the full biography »

Mother wants US soldier to stand trial in Italy over her son’s death – CBS17.com