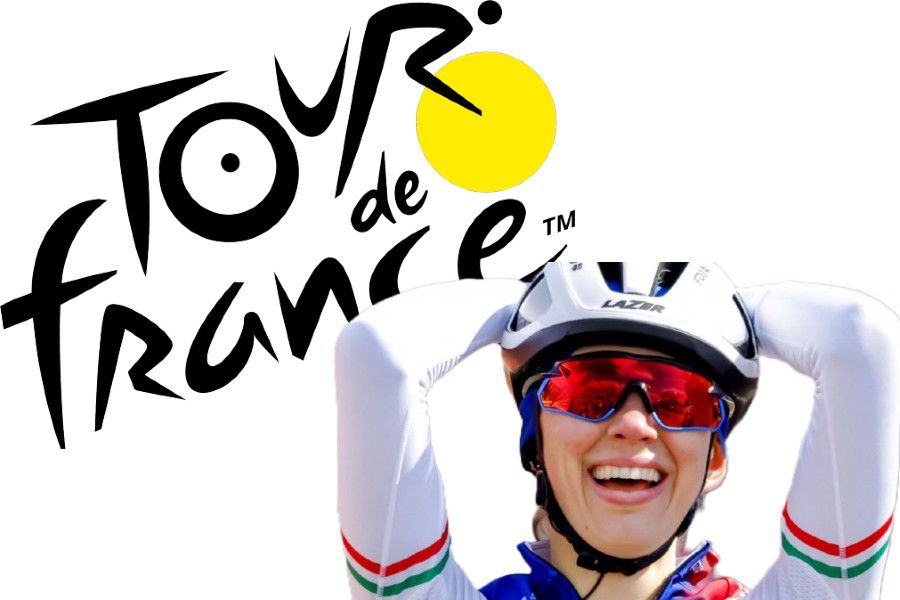 By Aaron V. Dwyer Last updated Jun 29, 2022
Share
Tour de France 2022 | PARIS (June 28, 2022) From July 24 to 31, we will focus on a handful of favorites for the Yellow Jersey on the Super Planche-des-Belles-Filles. Nevertheless, many of the 144 riders at the start will seek their moment in the sun on this historic first edition. Let’s meet 5 champions with the ambition to shine.

She is the revelation of spring. Winner of the Amstel Gold Race by overtaking the favorites before the red flame and of the Women’s Flèche Wallonne by being the strongest on the Mur de Huy, Marta Cavalli changed her profile during the Ardennes Classics. Now sure of her strength, the world No. 6 confirmed it at the beginning of June with a new success at the top of the giant of Provence, at the end of the Challenges Mont Ventoux Dénivelé. The 23-year-old Italian is now widely feared. She dreams of winning the pink jersey of the Giro this summer and wants to support her teammate Cecilie Uttrup Ludwig in her quest for the general classification of the Tour de France Women with Zwift.

During your ascent of Ventoux, we saw you take a look at the Tom Simpson stele. What does this victory on these steep slopes mean to you?

It’s a new stage for women’s cycling. We have entered a new dimension. It was a great feeling to be the first to reach the top of a cycling monument. There was a huge crowd of people on the side of the road. It was a great day for us.

You were born in Cremona, Lombardy. Is this where you grew up?

Yes, and I still live there! I only leave home for shopping. I know this is not the ideal place to train. It’s very flat, the winter is cold, there’s fog… But I like it! I don’t want to move right now.

Do you still live with your parents?

Yes, we live together.

Like Alberto Bettiol, when he won the Tour of Flanders in 2019.

Of course, sometimes it’s nice to be independent. But it’s nice not to be home alone and to have someone to help you, especially when you’re traveling all year round. But I am still young. I will probably think about it in the future, but not at the moment!

Did cycling come into your life thanks to your father?

Yes, but it also comes from my grandfather, who loved sports. He ran a youth team about 50 years ago and my dad raced as an amateur. From the age of 2-3, I went to see him run every Sunday with my mother. There were always bikes around. I think that made the difference!

How old were you when you started?

I was 11 years old. I waited a bit! I started doing artistic gymnastics and volleyball, among other things. Finally, I told my parents that I wanted to try. There was a small youth team near Cremona. I knew right away that this was the sport for me. And today it’s my job!

What prompted you to start at 11?

Because it was an individual sport, maybe. I wanted to show all my determination and strength in an individual sport. In the end, I learned that it wasn’t just about that. For example, at Ventoux, it was not only my victory, but that of the whole team.

What is your first memory of the Tour?

One of the very first is Chris Froome… running on foot on the Ventoux.

Did you think about it during your race?

Yes a bit! The day before, I looked for videos of Ventoux, to try to memorize the turns, and I also came across this one.

When you were young, did you go watch the Giro, or other races, from the side of the road?

Yes, and still today, because I still love him! In 2013, the last stage of the Women’s Giro was a time trial which ended in Cremona. I went there with my father and took a photo with Marianne Vos. I sometimes look at him and say to myself: “I was young, I didn’t know anything about women’s cycling and now I’m racing with Marianne!”

Did you have an idol?

Yes, Mark Cavendish. Once the Giro sprints were over, I got on my bike and tried to imitate him on the road! Maybe that’s one of the reasons I got into cycling.

Was it a dream for you to become a professional rider?

No, I haven’t really thought about it. It came naturally, year after year. When I think back, I wonder how I ended up doing that!

Was there another job you wanted to do?

No, not that I remember.

What did you study?

I was a science student in high school. I went to university but it was difficult to reconcile with cycling. I had to stop. But I think I will go back there in the future, because I like to study. For now, I have decided to put all my energy into the bike.

What does it mean to you to know that you can beat anyone in a tough race like Flèche Wallonne Women?

Many things. Before, I was never sure of myself and this uncertainty drained a lot of energy from me. Now I know I can do it. And the people around me too. They trust me. It’s a whole new dimension. But on the other hand, nothing has changed in my life. I’m still on the same team, I want to go in the same direction. I just regained my confidence.

Does this change your view of the Tour de France? Is the plan still to support Cecilie Uttrup Ludwig or are you going to run for yourself?

No, it’s still the same game plan. I will go to the Giro for the general. And I will support Ludwig in the Women’s Tour de France with Zwift. We took a look at the last three stages, I loved them! We will have our opportunities and I am sure it will be a great experience. The team is motivated, we have already won a lot. We will go to the Tour with determination.

What is a successful Tour?

If we could wear the Yellow Jersey for just one day, that would be great. But we also want to create a sensation, to put on a show for the people and the bike.

Track racing was your entry point to the highest level. Are you still competing on it?

Not really. In training sometimes, because it’s good exercise and good for the head. But having decided to improve in the mountains, it would not be a good idea to combine road and track again. Before (until 2020) I ran a lot with the national team. The track allowed me to understand what kind of effort is made for me. I developed technical skills there. On the track, you are always on the go and you have to make decisions quickly. It helps me on the road. I’m confident when the speed is high and I’m riding downhill. It helped me become a complete cyclist.

Distinctive feature: “She’s the most serious girl I know,” says her teammate Marie Le Net. “When the assistants offer her to put cream on her legs, she puts it on herself. She prepares her post-race snacks. She is very independent and pushes all the performance sliders to the maximum.