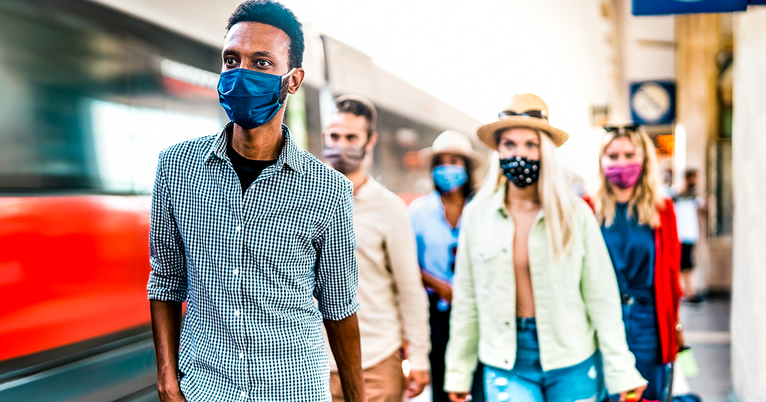 The increased use of face coverings as a defense against COVID-19 is creating social norms that encourage more people to hide in public, according to a new study co-authored by Yale researchers.

The study, published on October 11 in the journal PLOS One, is based on two experiments based on surveys conducted in the United States and Italy, countries that have experienced severe outbreaks of COVID-19. He found evidence that in both countries, when an increasing number of people wear masks, it creates a cycle of self-reinforcement that promotes behavior in others. According to the study, this does not encourage people to “ride free” by not wearing face coverings while enjoying the protection offered by those who wear masks in public places.

“Wearing community masks can be self-reinforcing, â€said Scott E. Bokemper, associate researcher at Yale’s Institution for Social and Policy Studies and the Center for American Politics, and lead author of the article. â€œPeople are more likely to wear masks and encourage others to do so when masks are ubiquitous. Importantly, we found no evidence that widespread masking reduces people’s willingness to wear masks or to ask others to wear their masks correctly.

“Of course, we often observe that some communities wear more masks than others, which suggests explanations based on social norms, â€he added. â€œBut the experimental design of this research allows us to rule out the possibility that these patterns occur for other reasons, such as people from different communities with different beliefs about the effectiveness of masks or fears about COVID-19. “

The study also showed that in the United States, public health campaigns that emphasize the use of face coverings to protect others are likely more effective than calls emphasizing how masks protect the wearer.

The study brought together Yale researchers with colleagues at Columbia University and institutions in Italy and Switzerland. The team included academics and faculty from the Yale School of Medicine, the School of Public Health, the School of Nursing, the Department of Political Science, and the Institute for Global Health.

The researchers conducted survey experiments based on vignettes conducted in the United States between October 1 and October 22, 2020 and in Italy between October 22 and November 8, 2020. At the time, the United States did not had no nationwide mask. mandate while Italy did. The American and Italian experiments had samples of 3,100 and 2,659 respondents, respectively.

Initially, respondents were asked how often they wear masks and how often they see other members of their community doing the same. Then, they were randomly assigned to read a text that explained how the masks protected the wearer or other people. A control group was presented with information unrelated to masking.

Participants read three vignettes: one about withdrawing money from an ATM, another about walking in a public park, and a third about attending a meeting room in their neighborhood. The behavior of the people depicted in the thumbnails was randomized so that almost everyone or very few wore masks.

In each scenario, respondents were asked what they would do if they forgot a mask or encountered someone wearing a face cover inappropriately. They were presented with four options: continue the activity normally; continue the activity but keep your distance from others; abandon the activity; either retrieve their own mask or have the other person wear theirs correctly. They were also asked to read the scenarios as unaffected third parties and report their assessment of the behavior described.

Experience has shown that in scenarios where almost everyone wore masks, the likelihood of respondents getting their own mask increased by 32% among American respondents and by 27% among Italian respondents. It also increased the likelihood that respondents would ask an individual to adjust their masks to fit properly by 26% and 29.4% in the US and Italian experiences, respectively. Overall, the presence of people wearing masks made respondents more willing to retrieve masks or ask others to adjust their masks in all scenarios in the United States and in the meeting and meeting scenarios. ATM in Italy.

“We haven’t seen any evidence that seeing more people wearing masks encourages free riding, â€said Gregory A. Huber, Forst Family political science professor at Yale Faculty of Arts and Science and co-author. of the study. â€œOn the contrary, it made people more likely to follow the social norm by wearing masks or intervening when they encountered someone with a mask slipping over their nose. A political implication of our work is that mask wearing may persist in communities where it is widely adopted in the absence of a government policy requiring the face covering. “

Providing information on how face coverings protect the wearer has had no effect on people’s behavior regarding masks in either country. However, the message about the effectiveness of masks in protecting others increased the willingness of US respondents to recover their face coverings in experimental scenarios by 10.3% and their willingness to encourage others to wear face masks correctly. 13.6%. In the Italian experience, the effects of the message on protecting others were not statistically significant, according to the study.

The other co-authors of the study are Amyn A. Malif, Kathryn Willebrand and Saad B. Omer – all from Yale – and Maria Cucciniello, Tiziano Rotesi, Paolo Pin, Elliot Paintsil and Alessia Melegaro.

Can Gordon Ramsay beat the Greeks for the best souvlaki?