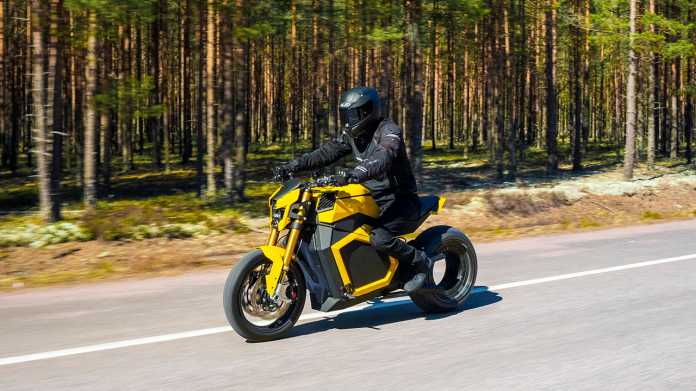 The Verge TS electric superbike has a clear view: its wheel hub drive allows for a dramatic hole in the center of your rear wheel hub. With 1000 Nm at the wheel, it theoretically brings twice the power of a Ducati 1299 Panigale S to the road.

It is not known how Teemu Saukkio came up with the idea to build an electric superbike in Finland (perhaps because of the long winter nights), but the result is impressive. The ingenious handyman had already installed the RMK E1 electric motorcycle in the idyllic port city of Turku in 2019 at the age of 28 and thus caused a sensation in insider circles. But that was only the start, Saukkio wanted to build an electric motorcycle with a wheel hub motor.

Production just below the Arctic Circle

He quickly realized that there were financially strong people and the company name changed from RMK to Verge Motorcycles because it sounded more international, as CEO Tuomo LehtimÃ¤ki thinks. They also moved the head office 300 kilometers further north to the provincial town of SeinÃ¤joki to set up a production plant there. Verge’s new electric motorcycle received its initials TS in honor of Teemu Saukkio. It is already ready for series production and can be ordered against a deposit of 2000 euros. Production is actually set to start in the summer, but COVID-19 has thwarted the company’s plans.

240mm rear tires thanks to the wheel hub motor

The Verge TS already impresses with its appearance: wide trunk and even wider rear tires. An aluminum frame serves as the backbone as the developers wanted to keep an eye on the weight of the Verge TS. She always carries it to 250 kilograms. It needs the 240 tire because the electric motor (with its technically required width) acts directly on the rim of the 17 inch rear wheel. The ring-shaped motor requires a hub as a support that extends almost to the rim. This in turn enables ultra-short swing arms that connect the wheel bearing to the frame.

The Verge TS from Finland impresses with a powerful wheel hub motor.

From a technical point of view, it makes sense not to fill the empty space in the center of the hub – such an electric motor is already quite heavy, and its unsprung mass makes it difficult to grip the ground on uneven roads. The undoubted advantages of this direct drive, however, are the elimination of a power transmission, such as the noisy transmission of the Harley-Davidson LiveWire.

With Energica models, however, you can hear the chain clicking all the way to the rear wheel. Needless to say, the main drive is so strong it even drowns the chain.

Due to the lack of gear ratios, the Verge rides as smoothly as you would expect from an electric bike. Neither the gears, belts nor chains of the rear wheel work there.

The big hole looks odd at first, but it has a certain charm, after all it clearly shows that an electric motor is working here. It is held by a four-arm aluminum swingarm, on the right side of which three bright orange cables lead from the 20.2 kWh battery to the motor. The lithium battery has a fan cooling system so that consumption and power output should be reduced as little as possible even under high loads.

In any case, there is enough torque for acceleration, the manufacturer specifies a maximum of 1000 Nm. This should not be a problem with five quintals plus the driver, because the value is twice that of a superbike. With the Ducati Panigale 1299 (test), for example, the ratios in primary transmission (x 2.46), transmission (x 2.6) and final transmission (x 1.77) multiply the current 137 Nm on the crankshaft at 1550.9 Nm on the rear axle. The Italian superbike impacts the road with a radius of around 0.316m (17 “/ 2 + 100mm tire height) 490 Nm – but only in first gear and only at 9000 rpm.

Above, below, and in all subsequent speed steps it is significantly less, while the driver of a Verge can use almost all of the torque while standing and activate most of it without interruption while driving. . The Elektrokrad allows a much more efficient use of this power. All that’s left is the weight disadvantage and the short range.

Disclaimer: This article is generated from the feed and not edited by our team.