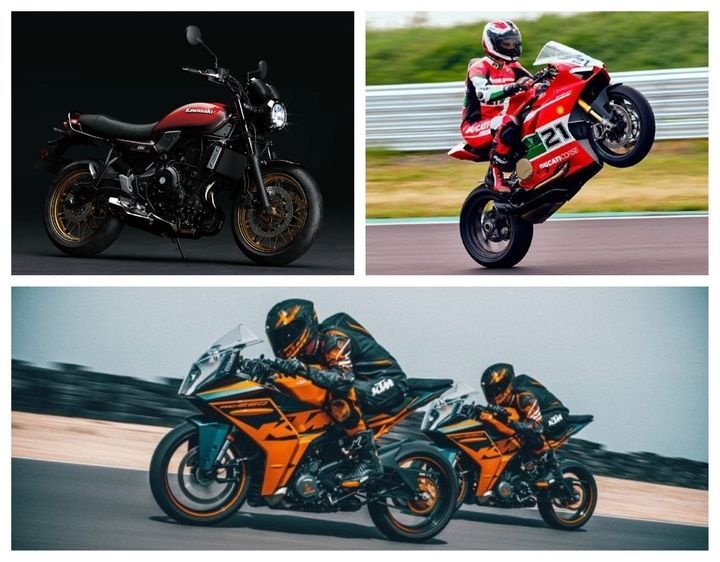 Royal Enfield Scram 411
RE has promised to deliver a new bike every quarter for six years, and with the latest launch being the Classic 350, it’s time for the Scram to make its debut. And the timing couldn’t be better, with the arrival of the Yezdi Adventure and the Scrambler on the market, and the The Himalayas are getting more expensive.

2022 KTM 390 Adventure
The Austrian brand launched the updated 250 Adventure in January, and the big brother’s debut will follow this month. If you planned to buy the 390 Adventure, waiting for now will reward you with new colors and stronger alloy rims for the bike.

2022 KTM RC390
the the completely updated RC 125 and RC 200 are already here, but KTM has kept the RC 390 on hold…until now. From new bodywork and lighter components to improved electronics and performance, the updated RC 390 has it all. Expect it to debut in India towards the end of this month.

Ducati Panigale V2 Troy Bayliss Edition
Who wouldn’t love a limited edition Ducati, right? the Panigale V2 Troy Bayliss Edition is not just a feast for the eyes, but also 3 kg lighter, thanks to its lithium-ion battery and single-seater configuration. Additionally, Showa and Sachs suspension components were replaced with an Ohlins NX30 fork and TTX36 monoshock. If you are already impressed with this bike, you can reserve one right away.

2022 Kawasaki Versys 650
Japan’s medium-displacement ADV now not only features a new body, but also a full LED headlight setup, a four-step adjustable windshield and a new 4.3-inch TFT display. But the highlight of the Versys 650 2022 has to be the new two-stage switchable traction control. Expect this bike to arrive in the second half of the month.

Kawasaki Z 50th Anniversary Range
Team Green recently celebrated the ‘Z’ range golden jubilee with the introduction of special edition models of the Z650, Z650RS and Z900. Now, Kawasaki’s Indian wing has already started teasing the launch, hinting that the bikes could arrive in the first half of the month.

Hero MotoCorp Electric Scooter
Last year, the Indian two-wheeler giant gave us a preview of its e-scooter and revealed that it will hit the streets by March 2022. Now, with Hero MotoCorp has already registered up to six trademarks for ‘Vida’, we believe the electric scooter could debut towards the end of this month.

End of an era for Bottega Rotolo