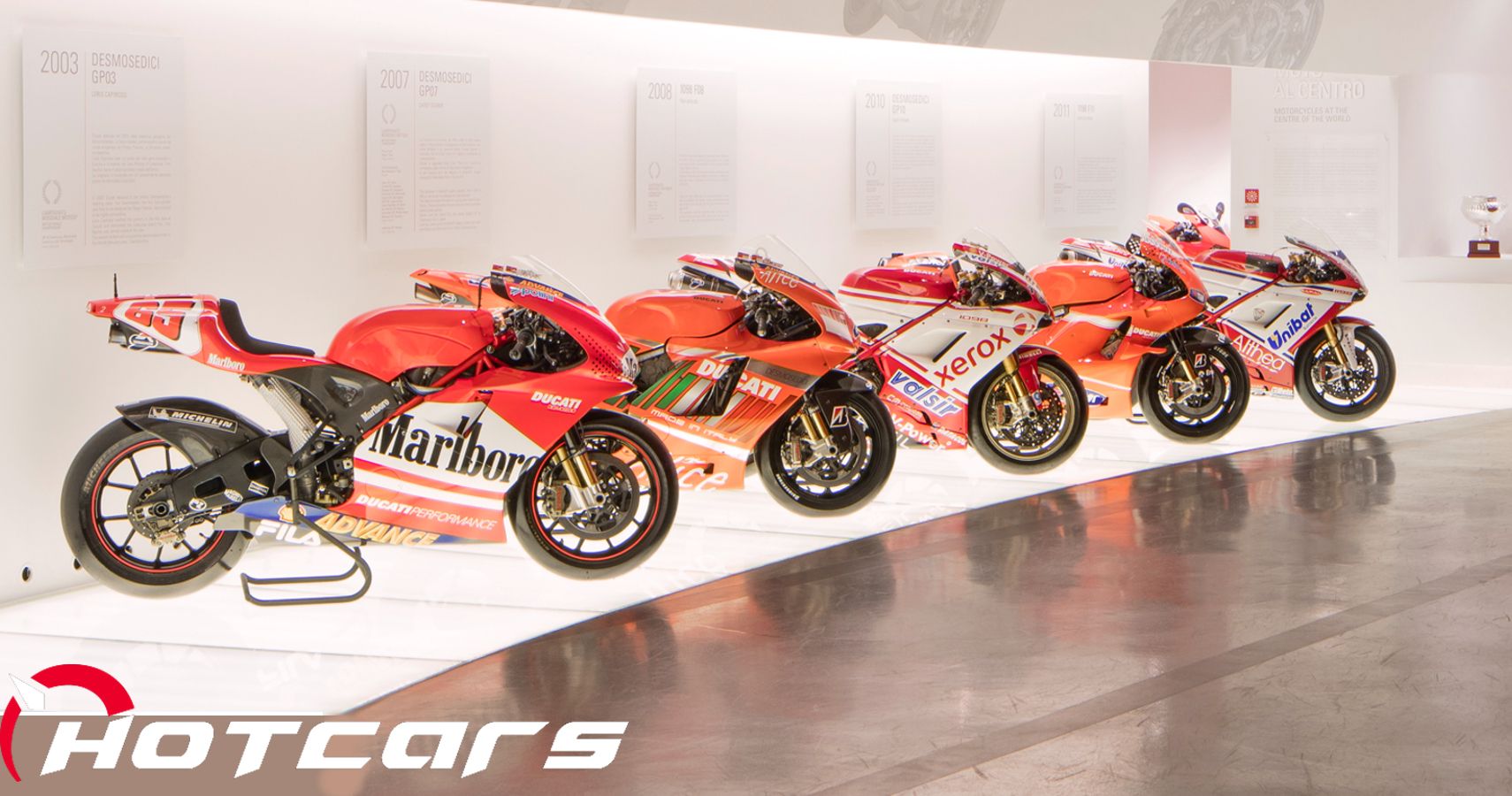 Few people know that the legendary Italian motorcycle manufacturer, Ducati, actually started out as a manufacturer of radio components. Founded in 1926 by the three Ducati brothers Adriano, Bruno and Marcello, Ducati has enjoyed great success and in 10 years the foundations of their company have grown enormously. With just two workers and a secretary, the Borno Panigale factory opened in 1936 with a few thousand employees.

Walking through the factory on a beautiful summer day in Italy, I could feel the sense of pride that all current employees have for the Ducati brand. They all wear their bright red shirts with the Ducati name printed on their chest with respect. There is a lot to see and the history of the factory itself is amazing. Located on the outskirts of Bologna, the Ducati headquarters is a must visit for anyone. You don’t have to be a Ducati fan or even a motorcycle enthusiast. Organizing a factory tour and a visit to the Ducati museum is definitely an enjoyable experience for everyone.

Ducati’s headquarters are in Emilia-Romagna, known as “Motor Valley”. This area between Bologna and Modena is home to the factories of some of the most famous automotive brands. Ferrari, Lamborghini, Ducati, Maserati, are all located here, as well as some internationally renowned racetracks. There is plenty to do for car enthusiasts and history buffs. Bologna itself is a city of art, culture and commerce. It also bears the name “The Fat” because of the delicious cuisine it offers, and the city has one of the largest and best-preserved medieval historic centers in Europe.

A quick bus ride to the outskirts of town will take you to the hallowed grounds of Ducati headquarters. I had a private tour of the entire facility and then was transported back in time to see some of the most historic and legendary motorcycles of all time in their one of a kind museum.

An immersive experience: the Ducati Museum

The Ducati Museum is right next to the main gate of the huge Ducati facility. As soon as you enter you are first greeted by a beautiful layout of current Ducati motorcycles. The DesretX, the Diavel and the beautiful Panigale V4 SP2 show the current brilliance of the brand. From then on, it’s an incredibly immersive experience in the brand’s history.

The Ducati Museum opened in 1998 and was designed as a way to tell the story of the brand using four different narratives: Moments, The Origins, History of Road Motorcycles and History in Competons. The 360 ​​degree hall is specially designed to guide visitors through the history of Ducati from its origins to the present day.

Before entering the circular hall, you will first discover some of the very first products ever made by Ducati. Radios, micro-cameras, projectors, calculators and even Italy’s very first electric razor are on display.

Next up is the very first Ducati motorcycle – the Cucciolo. The Cucciolo was actually a propulsion engine that could fit any bike. After World War II, Italy faced a mobility problem and Ducati needed to generate more revenue. It was then that the company decided to manufacture engines. 1946 saw the birth of this practical and efficient engine and the Cucciolo could run on any fuel and reach speeds of up to 50 km/h. It became an international success thanks to Ducati’s extensive sales network.

In 1949, the first complete motorcycle made in the Ducati factory was the Ducati 60. It used a modified version of the Cucciolo engine and marked Ducati’s entry into the world of motorcycle manufacturing. From the old posters on display, it was obvious that this motorcycle was also intended for female riders.

There’s an entire room dedicated to the birth of Ducati motorcycles, and it also includes original marketing campaigns, which are very cool to see.

In the inner circle of the room is the full range of Ducati’s most historic racing competition motorcycles. Although Ducati scored its first motorsport victories with the Cucciolo, it wasn’t until 1955 that Ducati created its first purebred sportbike. With the help of a new engineer named Fabio Taglioni, Ducati developed its first racing motorcycle – the Gran Sport Marianna. Taglioni became one of Ducati’s most important designers of all time, and the Marianna became one of the most dominant motorcycles of the 1950s, giving Ducati a reputation across Europe for producing motorcycles efficient and reliable.

Some of the brand’s most influential race bikes are on display at the Ducati Museum. You can get up close to these iconic machines and see the evolution of Ducati racing technology right before your eyes. Taglioni had also created the Desmodromic timing system, and you can see the first bikes that ever used this technology, starting with the 125 GP Desmo and 250 GP Desmo. Legendary racer Mike Hailwood has raced both of these bikes.

Ducati’s racing history comes to life through this incredible sequence of competition bikes, and each one tells the most compelling story. The range of competition motorcycles extends to the most modern and high-tech MotoGP motorcycles. Some of my favorites were the 1975 750 SS Demo, the 1986 750 F1 and the 2008 1098 F08 ridden by Troy Bayliss in his final SBK season where he won his third title.

The range of these magnificent race-competition motorcycles culminates with the 2016 Desmosedici GP16, and from there you’ll also get a glimpse of the suits and gear of some of Ducati’s most famous racers. It is then completed by an exhibition of trophies belonging to these champions.

The bikes that made Ducati a global icon

There are plenty of treasures to see at the Ducati Museum. Some of the rarest motorcycles include the Siluro, which translates to torpedo in English. Based on the Gran Sport Marianna, this unlikely bike set 46 land speed records. The 175 T used by Ducati employees Leopoldo Tartarini and Giorgio Monetti was also on display to cover 37,282 miles around the world. The trip lasted almost a year and was a marketing campaign to promote the Ducati brand as a reliable motorcycle manufacturer. Another favorite of mine is the 1990 Cagiva Elefant, ridden by Edi Orioli which won the infamous Paris-Dakar rally.

While there are plenty of hidden gems to discover at the Ducati Museum, the most fascinating motorcycles to see are the original road bikes that cemented Ducati’s name in history as the best motorcycle manufacturer in the world. The 1962 450 Scrambler Rebel Icon is the starting point. Designed to be an all-terrain machine, the Scrambler became an instant icon in the United States, which then spread across the world. It was also the first motorcycle to use yellow and orange color combinations which were not traditional for Ducati at the time.

The first bike to use the advanced trellis frame was the Pantah 500, and it was also one of the most successful motorcycles of the 70s. It fused the performance of Ducati’s new two-cylinder engine with the agility of the trellis frame. The Pantah paved the way for a new generation of Ducati sportbikes, such as the 750 F1, which was the creation of the supersport motorcycle category and was also the last motorcycle designed by Taglioni.

With the departure of Taglioni came the arrival of Massimo Tamburini and his first motorcycle design was the beautiful Paso 750. It was also the first road bike to feature a full fairing. He is also responsible for making red the official color of Ducati. This bike looks absolutely amazing when you see it in person, but there’s something even more spectacular to behold: the 916.

The 1994 Ducati 916 is perhaps one of the most beautiful motorcycles ever created and is widely considered Massimo Tamburini’s finest work. The details were immense and Tamburini even designed the heads of some screws himself. The 916 is a work of art and a privilege to see in person.

If you’re a fan of the naked sport bike, you’ll be very pleased to see the very first naked sport bike on display – the 1993 Monster 900. The Monster created a whole new segment of sport bikes that instantly became a sensation. world.

In total, the twenty most emblematic and exceptional Ducati models are displayed and presented in an exhibition in four different rooms of the museum. You can spend all the time you want at the Ducati Museum to admire these incredible machines and learn more about them.

Related: Here’s What Made The Monster Ducati Such A Legendary Motorcycle

The Ducati factory: a modern marvel

The Ducati factory itself has a great history and is also a must visit if you have the chance. Opened in 1936, it is Ducati’s headquarters where its motorcycles are designed, assembled and shipped around the world. The factory was once occupied by the Germans and was also heavily bombed during World War II. Today, however, there is a lot of life and when I entered the factory, thousands of employees were preparing to start their day. I was welcomed by a young and enthusiastic Ducati team and was happy to see many women working in the engine assembly shop.

The factory has many sections, with different assembly lines for each engine and model. I had the chance to see the new V4 engine assembly line. A Ducati motorcycle always begins with the assembly of the engine. Once a complete engine unit is assembled, it is then tested and then transported by small automated robots to the main assembly line where the wheels and body panels are assembled onto the frame. The Ducati Corse R&D center is also located here, but access is totally prohibited for obvious reasons. Some of the brightest engineers work here every day. Continuing the visit, you can experience the birth of a Ducati motorcycle. It’s a wonderful opportunity to witness, and you can feel the energy in the huge factory halls. Despite the pandemic, the factory workers have worked very hard and were able to deliver 60,000 motorcycles to customers in 2021, and they show no signs of slowing down in 2022. At the factory, you will clearly notice that the employees are very happy to work there.

Ownership of Ducati may have changed many times over its 90 year history, but in its current form it is still one of the most beloved brands of motorcycles, and it still makes some of the tallest motorcycles the most beautiful and sought-after performances on the planet. Revisiting the history of Ducati in its original birthplace was an incredible experience, and I highly recommend it to anyone. For more information on tickets, appointments and tour times, you can visit the Ducati website.