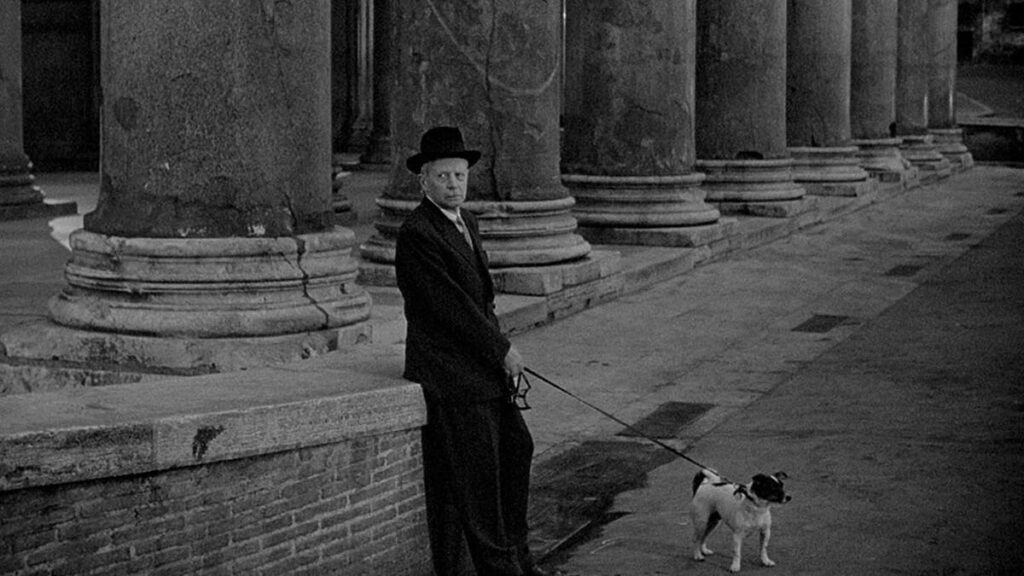 After having staged one of the key texts of the Italian neorealist movement – and certainly its most famous title – with “The bicycle thieves” in 1948, Vittorio De Sica would perfect the technique and ideology of this cinematographic period with his masterpiece ‘Umberto D.’ Neorealism redefined the image of Italy in the aftermath of World War II, accurately depicting the struggles of workers. ‘Umberto D.’ was one of the last films made during this era and remains one of the best.

It’s so cliché to say that but I don’t care – this movie is wildly relevant. As we rush headlong into the worst cost of living crisis since the post-war years, to see a film begin with pensioners marching through the streets of Rome for the government to increase their paltry pensions so that they can afford to live seems surprisingly relevant. Among the protesters is Umberto Domenico Ferrari (Carlo Battisti), a retired government employee. He just wants to be able to pay his rent and take care of his dog, which is basically the plot of the whole movie.

In his way is an indifferent government and a cruel landlord who wants to evict him. He is forced to sell his material possessions to make ends meet, and when illness sees him hospitalized, his landlady begins tearing down a wall in his bedroom in anticipation of his eviction or death. Falling into poverty and slowly being stripped of his dignity, the only rays of light in Umberto’s life are his beloved dog Flike and his friendship with young housekeeper Maria (Maria-Pia Casilio) who is pregnant but who does not know who the father is. .

If at this point you think ‘Umberto D.’ doesn’t exactly sound like a barrel of laughs, you’d be right. It is, however, a film that puts you in the emotional swing. The last ten minutes are some of the most heartbreaking scenes I’ve ever seen in a movie. Over the years there have been some accusations leveled at the film that anything involving a poor old man and a dog is emotionally manipulative, but that’s nonsense. Art is made to move you.

Shot with non-professional actors to give the film its hard-hitting authenticity, De Sica shot the film partly on location and also at the legendary Cinecittà studios in Rome. This allowed him to enhance the visual beauty of the film with exquisite deep-focus cinematography. Accompanied by Alessandro Cicognini’s operatic score, De Sica elevates the film from the guerrilla aesthetic of neorealism to something truly beautiful.

By Criterion standards, the extra features are fairly light for this release. Oddly, the DVD version has special features that are more complete than the Blu-ray. I’m not sure I’ve seen this before at Criterion.

But it’s the Blu-ray that I reviewed, and it starts with ‘C’est la vie: Vittorio De Sica’ – a made-for-TV documentary giving insight into De Sica’s career. The program features behind-the-scenes footage from several of his films as well as conversations between De Sica and his longtime writing partner Cesare Zavattini.

There’s also a 2003 interview with actress Maria-Pia Casilio who made her acting debut in “Umberto D.” when she was only 15 years old. The libretto contains writing by critic Stuart Klawans and a reprinted recollection by Vittorio De Sica.