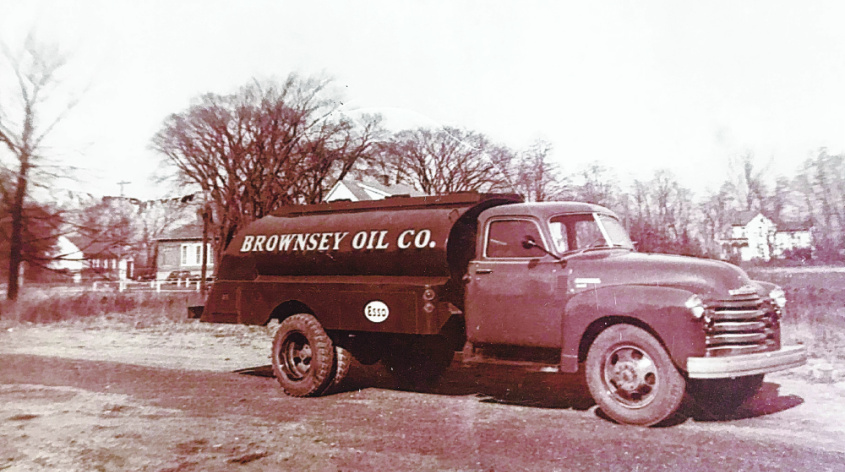 Six generations of Brownseys have lived in Niskayuna, beginning in the late 19th century.

Frederick initially considered joining two brothers in Australia but, faced with health problems, opted for a shorter trip to America instead.

After a difficult Atlantic crossing with his wife, Emma Priddle Brownsey (1855-1899), they immigrated via Ellis Island. A more comfortable overnight steamer carried them up the Hudson River to Troy. Sons Reginald (1877-1969) and Overton (1875-1956), who had traveled earlier, met them at Troy with a horse-drawn wagon for the final leg to Niskayuna.

Frederick fathered 10 children, including two namesakes who died in childhood. Sadly, Emma died in 1899 shortly after the birth of their last child, Adolphus, who also died in infancy.

Reginald and his brother Newman Philip, or “Phil” (1880-1965), figure prominently in the history of Niskayuna. Reginald founded “Brownsey and Marks Greenhouse” on Troy Road, located just west of the Winne 3009 Troy Road ancestral estate on land acquired from Thomas Winne. B&M Greenhouse was the first in this region to grow winter produce.

With nearly four acres under glass, it was considered at the time the largest greenhouse east of the Mississippi.

Phil was not so successful in his own greenhouse business, so instead he built a general store at Troy Road and Rosendale, opposite the landmark Denison General Store/Post Office. Eventually Phil found it more profitable to lease the building and it later became Mack’s Lunch, a popular restaurant in Niskayuna. A Dollar Tree store now sits on the site.

Phil also dabbled in home building. His homes included Sears catalog kits, shipped by rail through the Niskayuna depot. Among some notable homes built by Phil were those of the Cregier, Carpenter and Faddegon families.

Phil’s son, Laurence (1915-2015), was an enterprising young man who established a strong reputation as a newspaper boy. During World War II, Laurence collected scrap metal, which he sold to a yard in Watervliet. Thanks to the proceeds of these sales, Laurence bought coal which he delivered to several customers of the newspaper. Perhaps inspired by Uncle Reg, Laurence developed this side business into a full fledged coal business which later turned into kerosene and eventually heating oil operating as the Brownsey Oil Company.

Laurence also worked in the moonlight as a taxi driver. In this role, he met the famous artist Jackie Gleason. Gleason’s plane was delayed at the Albany airport, so he asked Laurence to recommend a great Italian restaurant. Laurence took him to Panetta on Broadway in Menands. Apparently it was a most enjoyable meal and, according to legend, Jackie promised to contact Laurence whenever a future trip brought her here.

Communicators complained about the strong smells emanating from the sealant the boys were using. Partners Peter and Jeff aspired to name their canoe “Old Ironsides”, but at the urging of appalled leaders, it became “Mohawk” instead. Scouts enjoyed many canoe trips in the Adirondacks, including a culminating adventure on a week-long trip to La Verendrye Wildlife Reserve in Canada.

Brownsey efficiently served its customers using large tankers, eliminating trips to the Port of Albany for its small delivery trucks.

Under Peter’s leadership, with the help of his son, Noah, Brownsey Oil flourished, reaching over 1,000 customers when it acquired Murray, Fanniff and Niskayuna Oil. In 2001 Brownsey Oil was sold to Buhrmaster Oil, now Buhrmaster Energy.

One can only wonder what new story Peter’s five sons and their offspring could bring to this interesting local family tale.

The author acknowledges and thanks Peter and Noah Brownsey for sharing background information and photos for this article. Please contact Niskayuna Town Historian, Denis Brennan ([email protected]) with comments or questions.

More from The Daily Gazette: