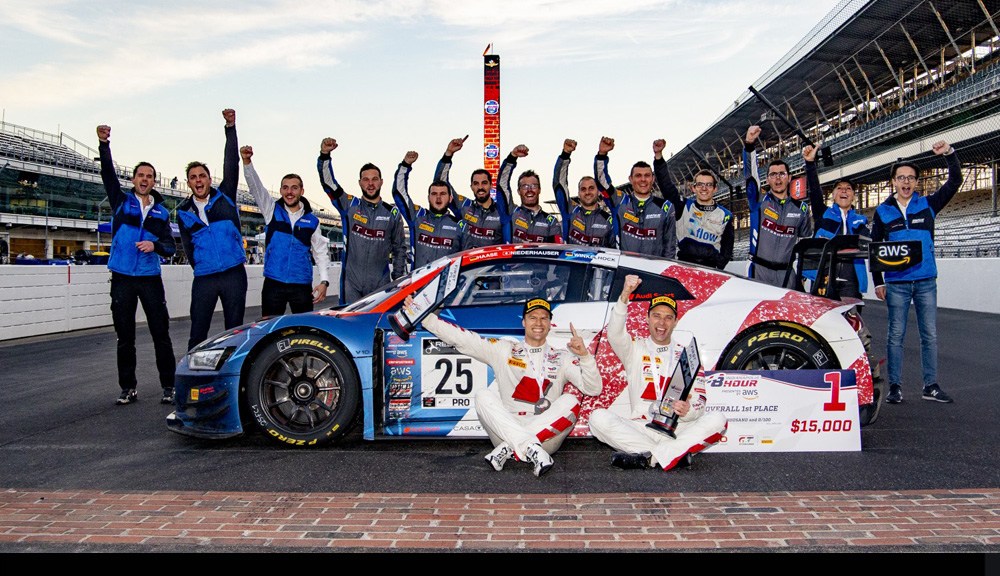 Sainteloc Racing came out on top after a savage finish at the 8 Hours of Indianapolis presented by AWS to give Audi Sport a considerable advantage at the top of the Intercontinental GT Challenge Powered by Pirelli constructor standings.

After being beaten by Ferrari at the 24 Hours of Spa TotalEnergies, the German brand responded perfectly at the Brickyard thanks to its No.25 crew made up of Patric Niederhauser, Christopher Haase and Markus Winkelhock. The victory brings Audi’s IGTC record to eight, four more than its closest rival, while Haase remains the series’ most successful driver with five wins.

Although never far from the leading battle, the No. 25 Audi was not clearly the favorite in this race. The car hit the front in the third hour with the experienced Winkelhock at the wheel, but was quickly reduced to second when Antonio Fuoco took the lead with the No.71 Ferrari AF Corse.

Indeed, the Italian marque appeared in the best position to secure victory for much of today’s competition, leading the early stages from pole with their # 51 crew from Pier Guidi / Ledogar / Nielsen before the n Â° 71 of Fuoco / Ilott / Rovera does not gain the upper hand. witness at the head of the peloton during the intermediate phase.

Shortly after losing its lead, the No. 25 Audi was further delayed by a driving penalty for a pit violation. By this point the race had been green for nearly three hours, but the calm first stages gave way to a frantic second half in which several periods of safety car scrambled order and allowed for variety. strategic options.

Several cars remained in play as the race progressed towards the decisive two hours. AF Corse’s No.71 Ferrari looked the most promising, although AF Corse’s No.51 488 GT3 lost considerable time due to a stopping penalty following a collision with the class leader GT4. Lamborghini was progressing well thanks to the No.3 crew of K-PAX Racing, while Audi and Mercedes-AMG both had potential winners.

The latter led the peloton to the green flag 90 minutes from the end, Raffaele Marciello having risen to the forefront thanks to an impeccable run by the n Â° 89 AKKA ASP. But once the race resumed, the Italian was quickly under pressure from Niederhauser, who took a race when Marciello dipped a wheel in the grass between turns 6 and 7. The pair went side by side. , allowing Callum Ilott to leap into the No.71 Ferrari. and sensationally ripping off the head.

Niederhauser followed the Briton and spent the next 30 minutes glued to the back of the leading 488 GT3. As the race neared its final hour, these two cars looked set to fight for victory, with Marciello and Dries Vanthoor’s # 32 Audi of Team WRT battling for the final podium seconds later.

Sainteloc was the first of the top pair to make his final save, bringing Niederhauser to the pit lane with 50 minutes remaining. At the same time, Ilott was turning a GT4 racer on the outside of Turn 1, only to misjudge his movement and make contact with both the car and the wall. The results were catastrophic for the Italian team: less than an hour from the finish, car n Â° 71 was eliminated on the spot.

Stopping in safety car conditions, Vanthoor was able to take the lead, while Jules Gounon took second behind the wheel of the No.99 Craft-Bamboo Racing Mercedes-AMG. The French driver’s race was ruined moments after the Green Flag was hit at Turn 1 by Team WRT’s No.37 Audi, after which he made contact with the No.58 McLaren.

Vanthoor held a four-second advantage over Niederhauser after the next safety car, but in another twist, the WRT team received a drive-through for not following race control instructions. In the midst of this ever-changing competitive order, the SaintÃ©loc R8 n Â° 25 returns to the lead for the first time since the third hour.

There would be no change this time around, however, with Niederhauser 11.9 seconds ahead of Marciello as he crossed the checkered flag. The victory represents a second major international triumph for the Sainteloc team, on top of their overall victory at Spa in 2017. Also on this occasion, longtime drivers from Audi Sport Haase and Winkelhock were part of the team. ‘crew. The latter was not there to celebrate with his team today, however, having left IMS early to attend the birth of his child. So it was left to Haase and racing star Niederhauser to mark their triumph by embracing the brick yard.

The second place was a remarkable result for AKKA ASP as the team did not receive their car until Saturday morning due to a late delivery. Indeed, the result was a fair reward for the efforts of Marciello, Dani Juncadella and Timur Boguslavskiy. The last place on the podium went to Lamborghini K-PAX Racing, which overcame a deficit in pace with a near-perfect racing performance from Mirko Bortolotti, Andrea Caldarelli and Jordan Pepper.

Double happiness for Sainteloc since its n Â° 26 team made up of AurÃ©lien Panis, Lucas LÃ©geret and Nicolas Baert finished fourth in the general classification and won the Silver Cup. The No.51 Ferrari placed fifth following another penalty for contact in the finals, followed by the No.32 Audi.

Victory in the Pro-Am class went to SunEnergy1 Racing and its No.75 Mercedes-AMG of Kenny Habul, Martin Konrad and Mikael Grenier, while the Pro-Am Challenge competitor’s launch race saw the checkered flag despite a difficult day for his McLaren. BimmerWorld’s # 36 BMW crew of Bill Auberlen, Chandler Hull and James Clay won the GT4 class, matching the result at Indy 12 months ago.

Audi’s lead at the top of the Intercontinental GT Challenge Powered by Pirelli constructors standings fell to 42 points over Ferrari with 44 points to score in the season’s 9 Hours Closing at Kyalami. The Ingolstadt brand is perfectly positioned to reclaim the title at the South African site, which is hosting the final event of the 2021 campaign from December 2-4.