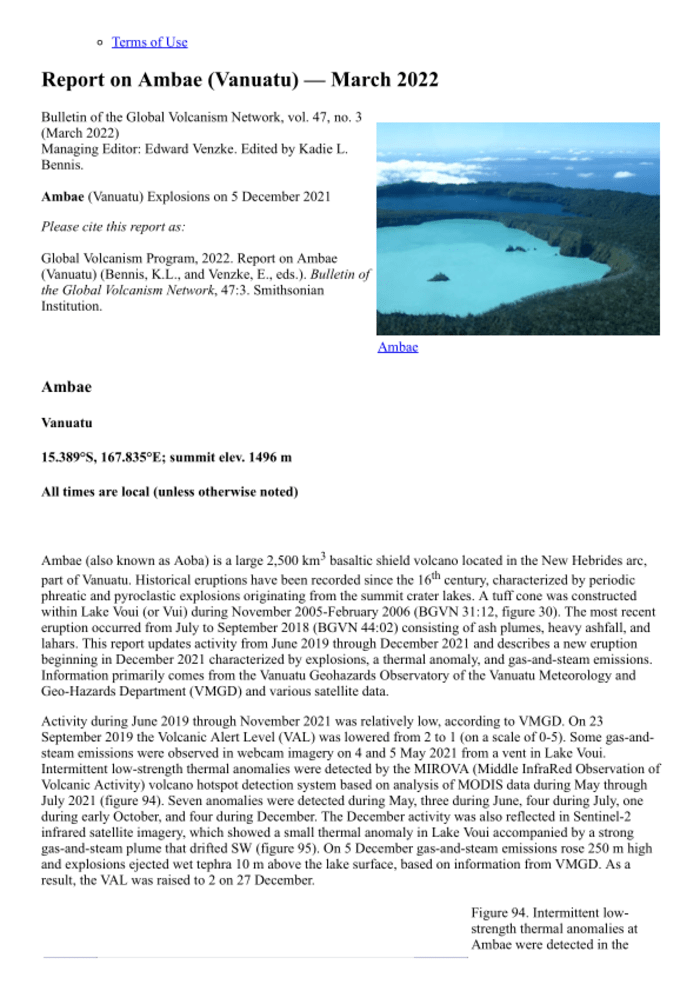 Please cite this report as follows:

All times are local (unless otherwise stated)

Ambae (also known as Aoba) is a large 2,500 km3 basaltic shield volcano located in the arc of the New Hebrides, part of Vanuatu. Historic eruptions have been recorded since the 16th century, characterized by periodic phreatic and pyroclastic explosions from summit crater lakes. A tufa cone was constructed in Lake Voui (or Vui) between November 2005 and February 2006 (BGVN 31:12, figure 30). The most recent eruption occurred from July to September 2018 (BGVN 44:02) consisting of ash plumes, heavy ashfall and lahars. This report updates activity from June 2019 to December 2021 and describes a new eruption beginning in December 2021 characterized by explosions, a thermal anomaly, and gas and steam emissions. The information comes primarily from the Vanuatu Geohazards Geohazards Observatory of the Vanuatu Meteorology and Geohazards Department (VMGD) and various satellite data.

Activity from June 2019 to November 2021 was relatively low, according to VMGD. On September 23, 2019, the Volcanic Alert Level (VAL) was lowered from 2 to 1 (on a scale of 0 to 5). Some gas and steam emissions were observed in webcam images on May 4-5, 2021 from a vent in Lake Voui. Intermittent low-intensity thermal anomalies were detected by the MIROVA (Middle InfraRed Observation of Volcanic Activity) volcanic hotspot detection system based on analysis of MODIS data from May to July 2021 (Figure 94). Seven anomalies were detected in May, three in June, four in July, one in early October and four in December. The December activity was also reflected in Sentinel-2 infrared satellite imagery, which showed a small thermal anomaly in Lake Voui accompanied by a strong plume of gas and steam that drifted southwest. (figure 95). On December 5, gas and steam emissions rose 250m high and explosions ejected wet tephra 10m above the lake surface, based on information from VMGD. As a result, the VAL was increased to 2 on December 27.

Geological summary. Ambae Island, also known as Aoba, is a massive 2,500 km3 basalt shield that is the largest volcano in the New Hebrides archipelago. A pronounced NE-SW trending rift zone dotted with cinder cones gives the 16 x 38 km island an elongated shape. A large pyroclastic cone containing three crater lakes (Manaro Ngoru, Voui, and Manaro Lakua) sits atop the younger of at least two nested calderas, the larger of which is 6 km in diameter. This large central building is also called Manaro Voui or Lombenben volcano. Explosive post-caldera eruptions formed the summit craters about 360 years ago. A tufa cone was built in Lake Voui (or Vui) about 60 years later. The last known flank eruption, about 300 years ago, destroyed the population of the Nduindui region near the west coast.