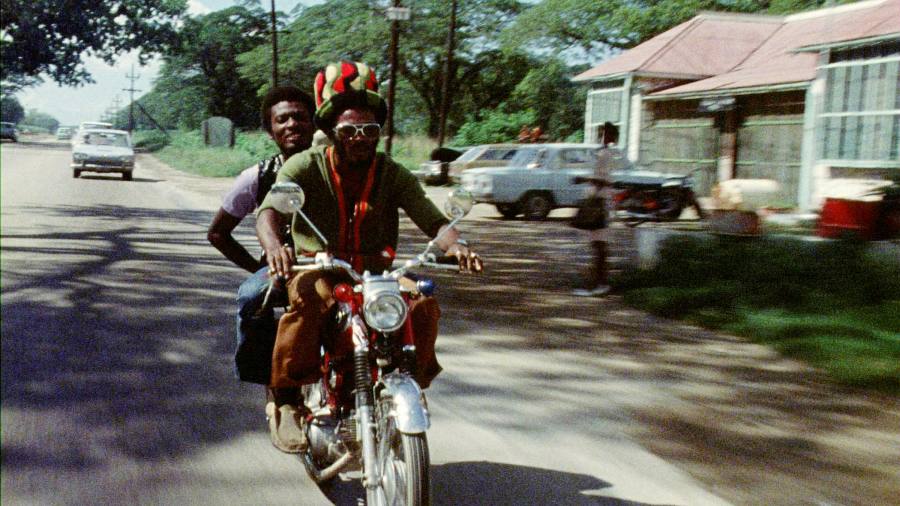 Reggae on Film: From Street to Dancehall to Screen

On August 6, 1962, Jamaica declared independence from colonial Britain. The new flag had a St. Andrew’s Cross designed in gold and green (symbolic of hoped-for revival) and black (in recognition of Jamaica’s slave plantation past). What the Colonial Office described as an “orderly transition” to self-rule, however, was misleading.

Beyond the parades of pennants and floats of the great independence party simmered a volatile brew of nationalist pride and pan-African activism. Queen Elizabeth II was confirmed as ruler of the Caribbean island, but historical Afro-Jamaican figures who had been denigrated or ignored by the British administration – rebellious Baptist preachers Sam Sharpe and Paul Bogle, race leader Marcus Garvey – have become semi-official national heroes. .

Jamaican roots reggae, with its Garveyite back-to-Africa ideology, offered hope of deliverance to ‘depressed’ Jamaicans and encouraged a generation of British-born black West Indians to embrace some of their heritage – Africa – which their parents had often avoided.

To mark 60 years of Jamaican independence, the BFI Southbank’s From Jamaica to the world: reggae in the cinema season explores the relationship of reggae to cinema. Music is serious business in Jamaica and the season covers all aspects of reggae culture to film, from fashion and sports to dance and music. dancehallese sub-language (“buffilous”, “batty riders”) that permeates the capital of downtown Kingston.

Organized by Lloyd Bradley, author of the books bass culture and It looks like London, the season explores, among other things, powerful American-Jamaican musical exchanges. Dancehall – the digitized reggae Jamaicans sometimes refer to as ragga or Yardcore – has significantly influenced hip-hop with its deejay styles known as “toasting” (scattering and talking over reggae records while moving crowds).

The UK Home Office refused entry to some Jamaican dancehall singers because of their homophobic lyrics, including Beenie Man (“I dream of a new Jamaica, come and execute all the gays”). Yet some female dancehall singers, with their shaved eyebrows, diamond earrings and carefully manicured fingernails, present an almost Gloria Swanson-like image of queenly adornment. dancehall queen (1997), directed by Don Letts and Rick Elgood, claims reggae as the musical voice of Jamaica, just as raï is the musical voice of Algeria or flamenco that of Spain — trance music from Africa.

A highlight of the season is the 50th anniversary re-release of Jamaica’s most famous film, The more they come (1972). Starring reggae singer Jimmy Cliff as Ned Kelly-esque bandit Ivan Martin, the film is, among other things, a documentary, darkly set in the western ghettos of Kingston. Perry Henzell, the director, a white Jamaican who had been educated in a public school in England, was a follower of the Italian neo-realist school of cinema (Bike thieves, bitter rice), and he brought a raw, raw immediacy to Jamaican cinema.

The soundtrack, composed by Henzell in less than a week, indeed introduced reggae to college audiences overseas. Reggae would not have flourished outside of Jamaica as it did without the soundtrack album. Mid-1970s nightclubs and wine bars in London and New York often echoed with the Slickers’ “Johnny Too Bad,” Desmond Dekker’s “007 (Shanty Town),” and other numbers from the film. Henzell’s pioneering film helped pave the way for Bob Marley’s success soon after.

Prior to The more they come, Marley had received only minimal airplay on BBC radio, and the British music press was unenthusiastic. Reggae was “a bit monotonous” and “black music being prostituted”, Melody Maker quoted Deep Purple and the Edgar Broughton Band as saying. In 1984, apparently because of his harangues about Africa and his repatriation to Africa, Morrissey of the Smiths announced that “all reggae is vile”. (Bizarrely, in October 2007, British Tories adopted Jimmy Cliff’s thrilling “The Harder They Come” as their Tory anthem, thus endorsing, albeit unwittingly, the criminal ways of a young, foul-mouthed Jamaican drug entrepreneur.) Henzell’s film was partly funded by Island Records founder and boss Chris Blackwell, who saw Cliff’s rebellious image as a way to promote his latest “discovery”, Bob Marley.

Marley’s life (he died of cancer in 1981, aged 36) is chronicled in the 2011 documentary by Esther Anderson and Gian Godoy. Bob Marley: The Making of a Legend. For many non-Jamaicans, Marley is reggae, but the cult of Holy Bob the “Rock Reggae King” is problematic. Bob Marley and the Wailers’ debut album produced by Blackwell, catch a fire (1973), was a Jamaican-American hybrid, whose driving Kingston beats had been layered in a London studio with mellow denim-rock guitar solos.

The word reggae, originally spelled “reggay”, first appeared in 1968 with a hit produced by Leslie Kong called “Do the Reggay” by Toots & the Maytals and is believed to be of African origin – maybe Yoruba. A series of beautiful Afro-centric roots reggae albums emerged in 1970s Jamaica. The fairest of them – Satta Massagana by the Abyssinians — was cited by the Clash on their London calling album.

The music gave off a hymn-like, incantatory vibe that few punk bands of the time could hope to emulate. by Franco Rosso Babylon (1980) and Menelik Shabazz’s coming-of-age film Burn an illusion (1981) is set in the midst of London’s black community at a time of strip searches by the Metropolitan Police and the incendiary “dub” reggae poetry of Linton Kwesi Johnson.

A taste of Trench Town Kingston’s swagger was brought to the UK city center by UK label Trojan, which promoted ska, an upbeat, calypso-influenced dance music that originated in the early 1900s. 1960 as a Caribbean spin on Motown and rhythm and blues (“R&B inside out,” Jamaican reggae guitarist Ernest Ranglin called it.)

Rudeboy: The Trojan Records Story (2018), by Nicolas Jack Davies, delves into how well-adapted mods and, later, skinheads embraced ska as part of their diet of imported American soul. Ska was, triumphantly, Commonwealth music, whose rhythms of racket, hop, hop and skip briefly brought white and black Britons together.

Rastafari, born in interwar Jamaica to a Garveyite-revivalist religiosity, was given impetus and cause by Mussolini’s invasion of Ethiopia in 1935. Lion of Judah, Ethiopian War, Lutz Becker’s 1975 documentary contains rare footage of Fascist Italy’s plunder of Haile Selassie’s kingdom. For Rastafari, the king emperor Selassie was a figure of the black Christ and a bulwark against “Babylon” (oppressive colonial society).

In Jamaica, as elsewhere in the English-speaking West Indies, Rastafarians have for many years been decried as timid and narcotic troublemakers. Roy T.Anderson African Redemption: The Life and Legacy of Marcus Garvey (2021) takes a sometimes critical look at the Jamaican figure of “Black Moses” whose messianic notions of Africa and black race consciousness have powerfully influenced Rastafarian culture.

The BFI season celebrates the work of a number of Jamaica’s forgotten enthusiasts. Theodoros “Ted” Bafaloukos, the New York-based photographer and screenwriter, was so impressed with The more they come that he decided to make his own reggae film. Toggles (1978), a feature film made on a budget of $250,000, was shot by Bafaloukos in Jamaica at a time of deadly gang political warfare, and featured a number of well-known reggae singers and musicians, from drummer Leroy “Horsemouth “Wallace to Winston Rodney of Burning Spear, Gregory Isaacs, Big Youth and Jacob Miller.

Bafaloukos (d. 2016) showed roots reggae culture at its peak before the advent of dancehall with his computerized keyboards and preset drum machines. Youngsters dressed neatly in their tracksuits and Rasta drummers hang out in the zinc-fenced shacks and ganja yards of West Kingston as reggae rumbles from giant speakers. The history and mythology of the Jamaican people are fabulously revealed in the heavy musical rhythm.