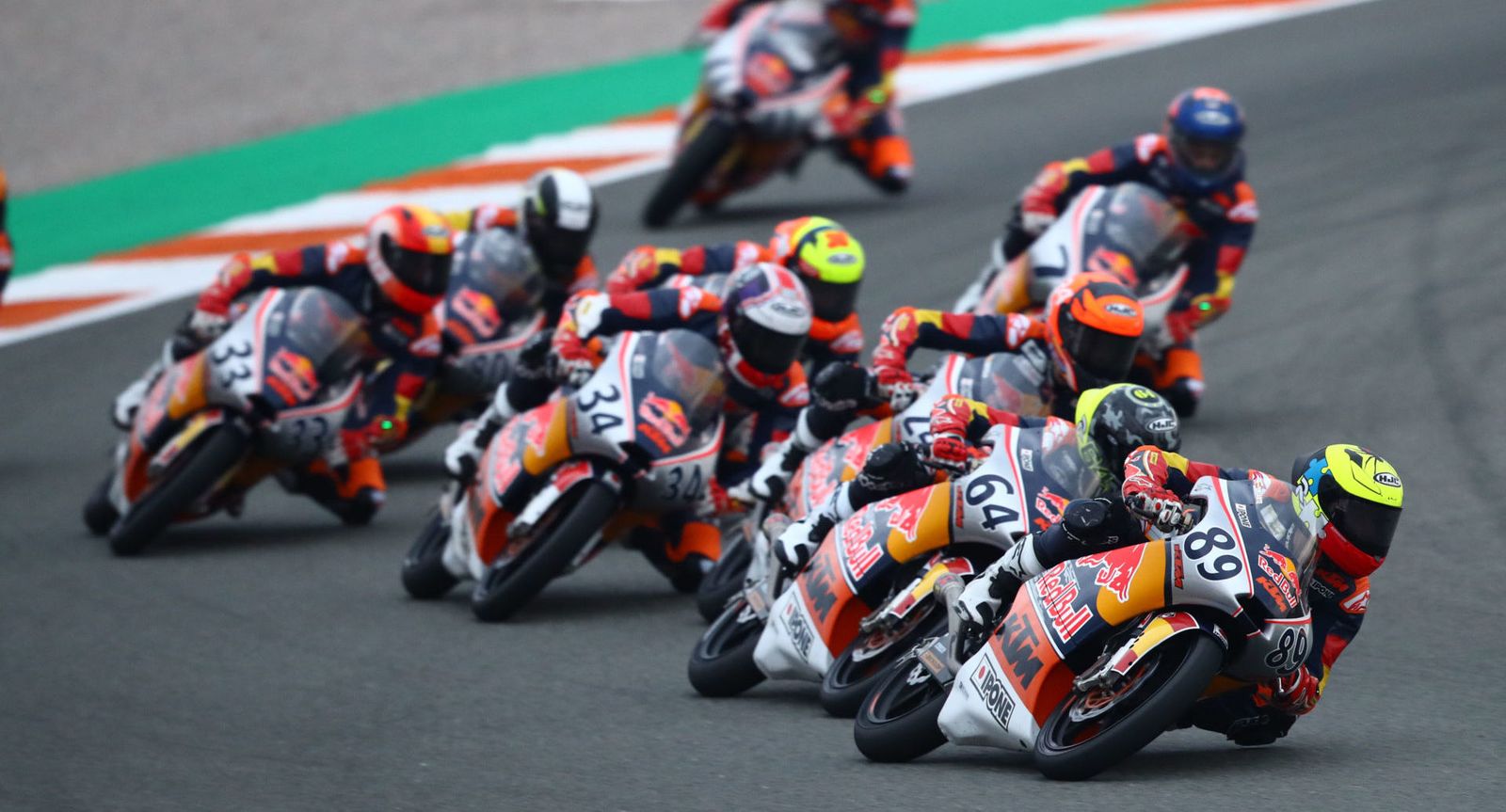 Part 2 – The Factory of Champions: all the paths to follow on ‘Road to MotoGP’

The supply chain of modern motorcycle racing which allows young emerging talents to take their first steps towards the decisive leap in international championships is very broad. This is an aspect that is not limited only to Europe, but also extends to Asian territories. Promoted and projected directly by Dorna Sports, it has been possible to create in a short time a sector called “Road to MotoGP” where the main objectives are to contain costs and to organize races in which there is no differences or technical imbalances, to ensure that the qualities of each are further emphasized.

Single-brand championship at European level, with events coinciding with certain MotoGP races, the competition began in 2007 thanks to the sponsorship of Dorna and the Austrian energy drink giant, Red Bull. Thanks to the technical assistance provided by KTM, over the seasons, it even went from the RC 125 to the much more advanced RC 250 R. The result of a calendar specially designed to coincide with MotoGP, riders aged 13-18 (chosen by the organizers through comparative selections) have the opportunity to exhibit themselves on the circuits of the Old Continent, with the aim of bringing them closer to the international scene. The project has also been extended to our country under the agreement signed last year between Red Bull Italy and the IMF to support the Pata Talenti Azzurri in the circuit racing sector.

The Rookies Cup has proven its ability to bring out young talents. Although he had to wait a few seasons before arriving in the 125cc World Championship at the time, the current Pramac Racing driver Johann zarco obtained the title in 2007, followed by two exceptional cases represented by JD Beach and Jacques Gagne since they were respectively winners in 2008 and 2010: apart from a few rare appearances in wild-cards, both did not have the opportunity to run permanently in the World Championship (just won in SBK in 2018), but they found fertile ground in the United States, as evidenced by the titles won in MotoAmerica SS600 and SBK. In addition to various champions such as Jakub Kornfeil, Lorenzo Baldassarri, Florian Alt, Karel Hanika, Bo Bendsneyder, Ayumu Sasaki, Kazuki Sasaki, Can Oncu and Carlos Tatay, the series also turned out to be an excellent springboard for some Spaniards: the 2018 Moto3 champion Jorge martin (1st in 2014 and now protagonist of MotoGP alongside Zarco) and rising star Pedro Acosta (promotion 2004, reigning champion of the Rookies Cup, current leader and great revelation of Moto3).

Northern Talent Cup, in search of the new Saarinen and Mang

Launched at the end of 2019 and strongly supported by Dorna in agreement with ADAC and (here also) KTM, The Northern Talent Cup aims to encourage the growth of young riders in northern and central Europe, regions so far far removed from â€œhigh levelâ€ championships. Based on the European Talent Cup regulations, the maximum number of participants is 26 between 12 and 17 years old, that run with standard RC 250s. Although the first season was affected by the outbreak of the Covid-19 pandemic, forcing the organizers to set up a calendar of only four rounds spread mainly in Germany (Sachsenring-Lausitzring-Hockenheim) and the Czech Republic (Brno) arm in arm with the IDM, the NTC made a stopover this year in excellent facilities such as Le Mans (with the World Championship), Assen and Red Bull Ring, not to mention Oschersleben. It is a championship which gradually rises, as evidenced by the fact that the winner will participate in the Rookies Cup the following year. (the 2020 champion Soma gorbe and the same for the immediate 2021 winner, Jakub Gurecky), while at least two of the remaining riders will be entered for the selection event.

European Talent Cup, for the jump in the Junior Moto3 World Championship

Inspired by the Asian Talent Cup single-brand series which, to date, has produced racers of the caliber of Ayumu Sasaki, Kaito Toba, Somkiat Chantra, Ai Ogura, Deniz Oncu and recently Taiyo Furusato (born in 2005, four victories out of four and 1st place on his debut in the 2021 Rookies Cup in the Mugello race to replace the injured Gabin Planques), since 2017, the European Talent Cup has been part of the FIM CEV Repsol program in agreement with Dorna. Instead of the underwhelming Production category, it’s reserved for young riders aged 13 to 17, all of whom race on the same standard Honda NSF250R machines. with the intention of allowing talented prospects to make the jump to the Junior Moto3 World Championship or the Red Bull Rookies Cup (similar to the British Talent Cup organized in parallel with British Superbike), But that’s not all: the different winners – Manuel GonzÃ¡lez (Champion SS300 2019, currently in World SS600), Xavier Artigas and Izan Guevara, both in the Moto3 World Championship – who have all passed through the CEV, are fine examples. A championship in which even two Italian riders Matteo Bertelle and Matteo Patacca made note (this year they are involved in CIV), in July the ETC sadly recorded the tragic death of Hugo Millan, hit head-on by another pilot following a fall on the Aragon track.

SuperSport 300, at the school benches for the Superbike World Championship

Unlike the aforementioned championships, created to replace the Junior European Cup, the Supersport 300 (intended for production models) has joined the program of the European World Superbike event. TTo participate, riders must be at least fifteen years old, but motorcycles authorized to race in this category are not exclusively 300 in displacement, and for this reason the minimum weight and engine speed vary for each model. While previously motorcycles such as the Honda CBR 500RR were included, last season the list was limited to only the Yamaha YZF-R3 and Kawasaki Ninja 400, with a few rare exceptions represented by the KTM RC 390 R. Since then its debut in 2017, it was largely the land of conquest of the Spaniards thanks to the triumphs of Marc Garcia, Ana Carrasco, Manuel Gonzalez and recently Adrien Huertas, with only the Dutch Jeffrey Buis break supremacy in 2020. Although the intention of the category is to create an entry ladder to SBK in a relatively economically sustainable manner, giving all runners the same winning options, it has repeatedly stood out with its tight competition and is considered too dangerous. In this sense, in recent weeks, the untimely death of young Dean Berta Vinales in Race 1 at Jerez de la Frontera propelled the category into the eye of the storm.

Veteran actor Dharmendra shows off his first car on Instagram, bought in 1960