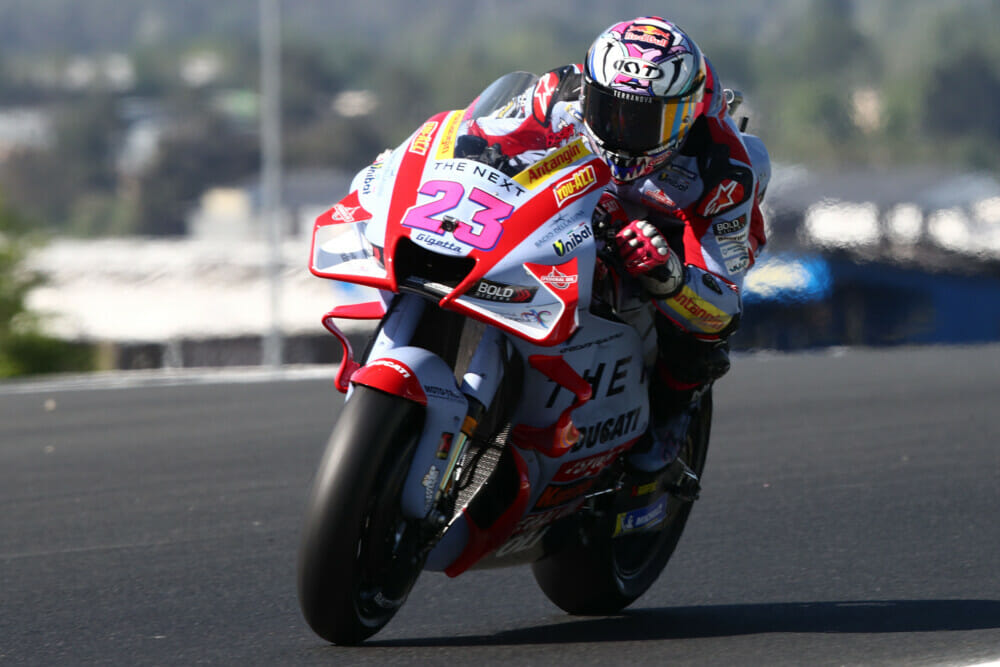 Confirmation finally came Thursday that Suzuki is in negotiations with Dorna to leave the MotoGP world championship in 2023. A short 98-word statement declaring that “the current economic situation” as well as “the need to focus” the “factory’s efforts on the big changes facing the automotive world” were the reasons for the explosive decision.

Driver Alex Rins said he was “completely crying” when he heard the news at the test which fell the day after the Spanish GP. “I have given this team everything since 2017 to try to have a competitive and winning bike.

Besides dealing a blow to the series, the way the factory communicated the news was disconcerting. None of the senior factory bosses spoke to the riders (or the majority of the team members) to explain their reasoning. “It’s a bit strange,” Rins said. “The president of Suzuki – Toshihiro-San – he’s super nice to me. He sent me a video saying ‘congratulations’ when my baby was born. But I haven’t received anything.”

A public relations disaster for a factory that expects its riders and team to continue the championship fight this weekend.

The latest MotoGP controversy has surrounded the revelation that Pecco Bagnaia’s front tire pressure was below the legal amount for the entire Spanish GP. As revealed by veteran journalist Mat Oxley, one could wonder why the Italian wasn’t disqualified.

But it has emerged that many runners have been below minimum pressure for more than half a race in at least one encounter this year, including Portugal’s Fabio Quartararo. All the factories are aware of the violations, but none are sanctioned. Main reason given: there is no single sensor that all teams use, and some are to be feared as slightly inaccurate.

“I was in an illegal situation but that also means that 18 riders since the start of the season were illegal,” Bagnaia said, referring to the other riders. But no one was penalized. So we’re talking about nothing. »

A statement from technical director Danny Aldridge revealed that there were plans to introduce a standard sensor from next year and to introduce penalties for any violators.

News of Suzuki’s departure brought two high-class riders back into the market. Joan Mir looks likely to be betting to join Repsol Honda next year and has admitted he is in talks with the factory. Alex Rins said all options were open with Aprilia possibly his best bet at the moment.

In light of the Suzuki speculation, a communication from series organizers Dorna said it had “great interest” from “official factories” and “independent teams” keen to join the series at their place. While it remains to be seen which new factories are interested, Leopard, who runs Moto3 title challenger Dennis Foggia, has made no secret of his desire to enter the premier class.

Likewise, the American Racing Team, who run Cameron Beaubier in Moto2, might want to push for those grid spots.

Francesco Bagnaia (Ducati Lenovo Team) had been fastest for much of the 45-minute session before Aleix Espargaro took the lead with a time of 1:31.574 in the time trial. Bastianini then recorded a time of 1:31.523 which would not be counted due to a shortcut at Chemin Aux Boeufs (Turn 9/Turn 10), but regrouped with a 1:31.148s just before the checkered flag .

No sooner had he reset Johann Zarco’s all-time lap record, which dates back to 2018, than the Italian crashed losing the front at the Turn 3/Turn 4 chicane. Aleix Espargaro then went faster than he had gone minutes earlier, but remained second after clocking a time of 1:31.350. Rins had been second fastest in FP1 and proved that was no fluke when he clocked 1:31.445 to finish third in the day’s final session in sunny Le Mans.

(Idemitsu Honda Team Asia) is officially the leader after the first two Moto2™ practice sessions of the SHARK Grand Prix de France. The Thai rider broke the all-time lap record in FP1 and while Augusto Fernandez (Red Bull KTM Ajo) went even faster in FP2, that lap does not count due to the presence of a yellow flag .

Chantra had beaten four-year-old Francesco Bagnaia’s Moto2™ benchmark at Le Mans when he clocked 1:36.108 in TH1, but it looked like his bragging rights would only last a few hours. About five minutes from the end of the second session of the day, Fernandez qualified with a time of 1:36.030, but had done so crossing a yellow flag zone triggered by a fall from Marcel Schrötter (Liqui Moly Intact GP).

Instead, the best Red Bull KTM Ajo rider is Pedro Acosta, second in combined times after setting a 1:36.166 which was fastest in FP2, with Fernandez third. The latter was officially the third fastest in FP2 at 1:36.394, although he went even faster than that by recording a 1:36.263 in FP1.

Leopard Racing’s Dennis Foggia picked up where he left off in the morning session with a dominating performance securing him free practice honors on Friday at the SHARK French Grand Prix at Le Mans. The Italian recorded the three fastest laps of the session for an impressive 1:41.680 to leave him 0.428s clear of title rival Izan Guevara (Gaviota GASGAS Aspar Team), with teammate Tatsuki Suzuki in P3.