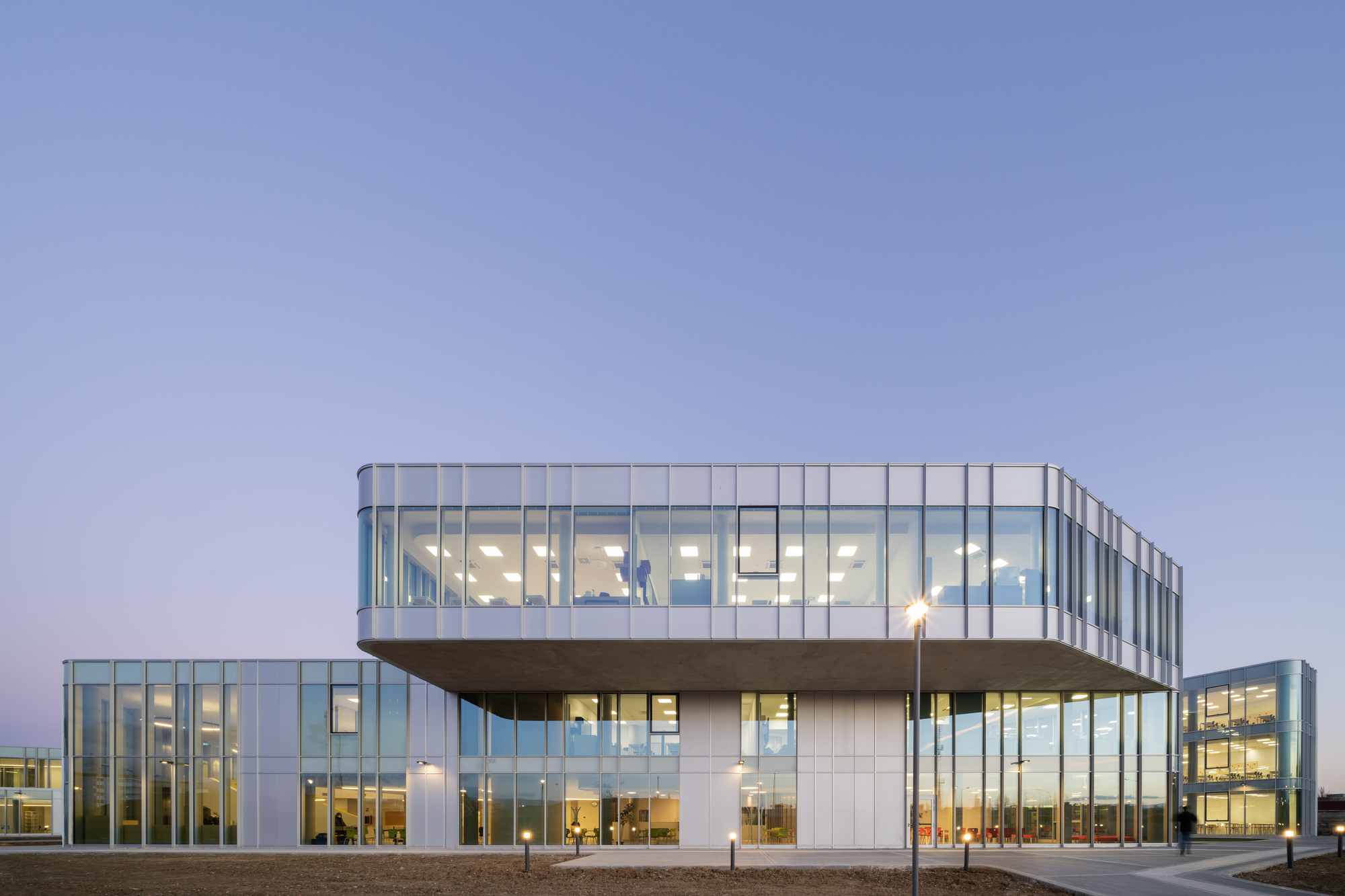 “A contemporary school must be a privileged place for the transmission of knowledge, a civic center and a point of reference for the community”. A new science high school for the metropolitan area of ​​Florence is a design challenge that can inevitably be resolved at a formal level through a synthesis of the urgent needs of the territorial context. But this can also be an issue for the territory itself, which must establish strong synergies between the institutions that govern it to improve the built environment, the school/culture and the work of the territory. Settanta7 has designed the new “Anna Maria Enriques Agnoletti” Scientific High School in Sesto Fiorentino with this aim: an attractive and welcoming architecture, whose transparency and sinuosity create a symbiotic relationship between the learning spaces and the new urban context.

The new high school is located in an old agricultural context of the Florentine plain and develops in a single elongated volume, composed of three blocks, two with a pedagogical/educational function and one dedicated to the gymnasium. The solidity of the blocks is interrupted by half-courts which open towards the setting and are angled in such a way as to recall the directors of the country church present on the lot; the orientation of these pits also guarantees perfect lighting of the learning spaces.

If on the one hand, the three blocks have been positioned in a coherent way, with the already established urban fabric, on the other hand, the search for alignment with the church present on the spot and with an east-west orientation has generated the rotation of volumes and the creation of three courts, access and reception areas for all users.

The building develops on three floors above ground around the south courtyard and on two around the north courtyard. The rotation of the volumes has generated terraces with a vegetal coating that recalls the agricultural landscape reducing the carbon footprint of the new construction, as well as representing a subsequent educational space for students. overlooked by the large perimeter glazed walls of the east facade. The school is designed to accommodate 900 students in 35 classrooms and 5 laboratories.

The ground floor of the school is an open space for the local community. It is divided into an auditorium, a café and a library, as well as offices and laboratories: thanks to these activities, the school will fully become a civic center. Using European Community Schools as a reference, the interiors were designed with inspiration from creativity, entrepreneurship and student-teacher cooperation; fluid and flexible distributive spaces promote informal relationships and innovative pedagogical approaches. The spaces dedicated to “frontal teaching” are mainly housed on the east facade, achieving better lighting performance and internal comfort control.

Environmental considerations characterize the entire project. With its reinforced concrete structure, the building displays significant technological energy-saving systems: a 140 KWp photovoltaic system, a mechanically controlled ventilation system in all areas, an insulated enclosure and an intake reduction system. shades by a screen line. The outdoor space provides columns for green e-vehicles and bike racks in protected areas, “Because it’s not just the construction project itself that sends a clear message about how to plan and living more respectful of the environment, but also the way to reach the school” – explain the architects.

Due to the surrounding artifacts, different characters were chosen for the different fronts. On the west facade, a continuous facade, with a higher percentage of glazed surfaces compared to the opaque parts, as a sign of openness and welcome towards the user and the community; a configuration that arises in relation to the cycle path, traffic, pedestrian mobility and the nearby green space. the laboratories, with a rigorous and functional character, are oriented towards the East and this has determined an inversion of the transparent/opaque relationship.

The laboratories are located on the faceted facades of the courts. Much emphasis has also been placed on the design of connective spaces; which are used not only for the circulation of students but also for the organization of complementary educational activities. The diffused library, the spaces for individual reading, and for discussion groups, free time, meeting, tutoring were thus born, within the connection, like satellites which punctuate and enhance the common spaces.

The two main staircases are in fact the heart of the interior project: characterized by a double height, they represent the places of vertical connection, where it is possible for students to build relationships and grow beyond the room. of class. A CONI-certified sports hall and a modular auditorium complete the school’s equipment. The entrance system is designed for the use of collective spaces even outside the school, with the multifunctional perspective of serving not only the school but also the community of Sesto. “The project lasted only 15 months, which is very little considering the Italian public works” – explain the architects.