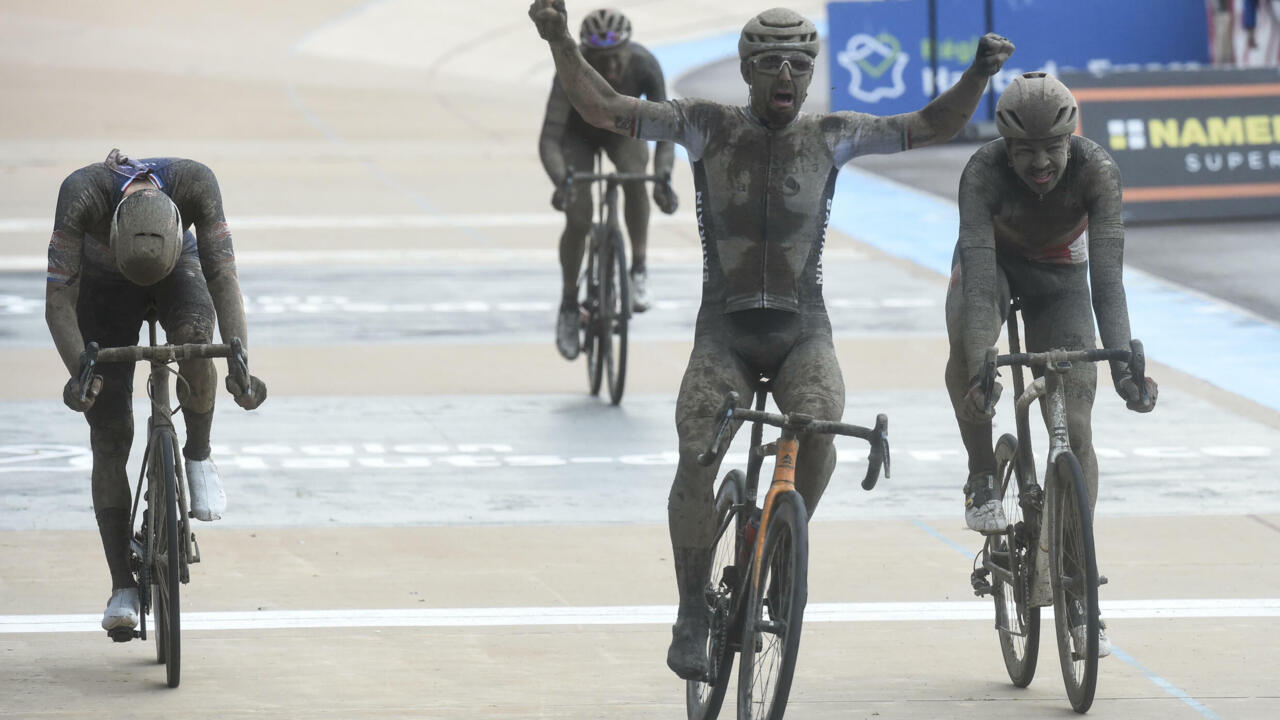 A mud-splashed Sonny Colbrelli won a three-way cat-and-mouse fight on Sunday to claim victory in an epic Paris-Roubaix in appalling conditions.

After a 258 km race on cobblestones and mud, European champion Colbrelli rushed into the Roubaix velodrome alongside Florian Vermeersch and favorite Mathieu van der Poel before overtaking them both on the line. .

The courageous Vermeersch, 22, started the sprint late, but Colbrelli, a specialist in the discipline, passed the Belgian on the line.

“Florian walked past me as I was watching van der Poel, after 258 km you don’t know what’s left in the tank, but it was my day,” said Colbrelli.

“My first Parigi-Roubaix!” he added, using the Italian translation for the French capital.

Already covered in mud, the trio had caught up and passed the lone escaped Gianni Moscon 15 km from the finish line on one of the cobbled mining roads that make this race so special.

Rider Ineos Moscon looked good for the win before a puncture, followed quickly by a crash, put an end to his courageous effort.

“I was just following van der Poel,” said Colbrelli, who threw himself to the ground and turned around screaming with joy.

He was quickly shown to the showers and led to the podium where he received the cobblestone trophy and cried as the national anthem was played.

Finalist Vermeersch said he was both proud and disappointed.

“Right now it’s really painful, but I hope in a few days I will feel better, I should be proud after that,” he said.

Even finishing such a perilous race would be something to be proud of as only 94 of the 173 participants crossed the finish line in the allotted time, with 69 retirements along the way and 10 excluded for a late finish.

Completing cycling’s most feared endurance event in 6h 01min 57sec, Colbrelli was the first Italian to win Paris-Roubaix since Andrea Taffi in 1999 and the first rookie to win since Noel Flore in 1959.

“I never thought of winning this race, and doing it on my first Paris-Roubaix is ​​incredible,” admitted the winner.

“It was stressful and tiring and I was afraid of an accident,” said the Bahraini driver, 31, who has had the best season of his career.

“I tried to stay focused on not falling and staying on van der Poel’s wheel,” he said.

Fearing for its treacherous cobblestones, the wet weather meant the potholes were covered in puddles and some sections of the road, through the potato and beetroot fields, were drenched in snow melting, sending luminaries such as Peter Sagan and Wout van Aert down nasty falls from which they never fully recovered.

Paris-Roubaix had 30 paved sections for the 2021 edition, each with a difficulty rating of 1 to 5 stars for a total of 55 km of paved road, containing more than six million stones which are preserved by volunteers as part of local culture in the former mining region.

Heavy nighttime storms raised fears that the ‘Hell of the North’ was even more difficult and unpredictable than usual and, although the storm died down by the time the race began, the road was in such bad shape. state that there were falls galore along the way.

The race no longer actually starts in Paris but embarked on a storm in Compiègne with 173 runners at a site near where the World War I armistice was signed in pouring rain and seasonal temperatures of 12 ° C.

Considering it ends near the Franco-Belgian border, this is surprisingly the first wet edition in 20 years, meaning no one at the start line had experienced the mud race, which was so slippery. that even the television motorcycles were falling.

MotoGP, Bagnaia challenges Quartararo: “on paper he is faster, but I will fight to stay ahead”