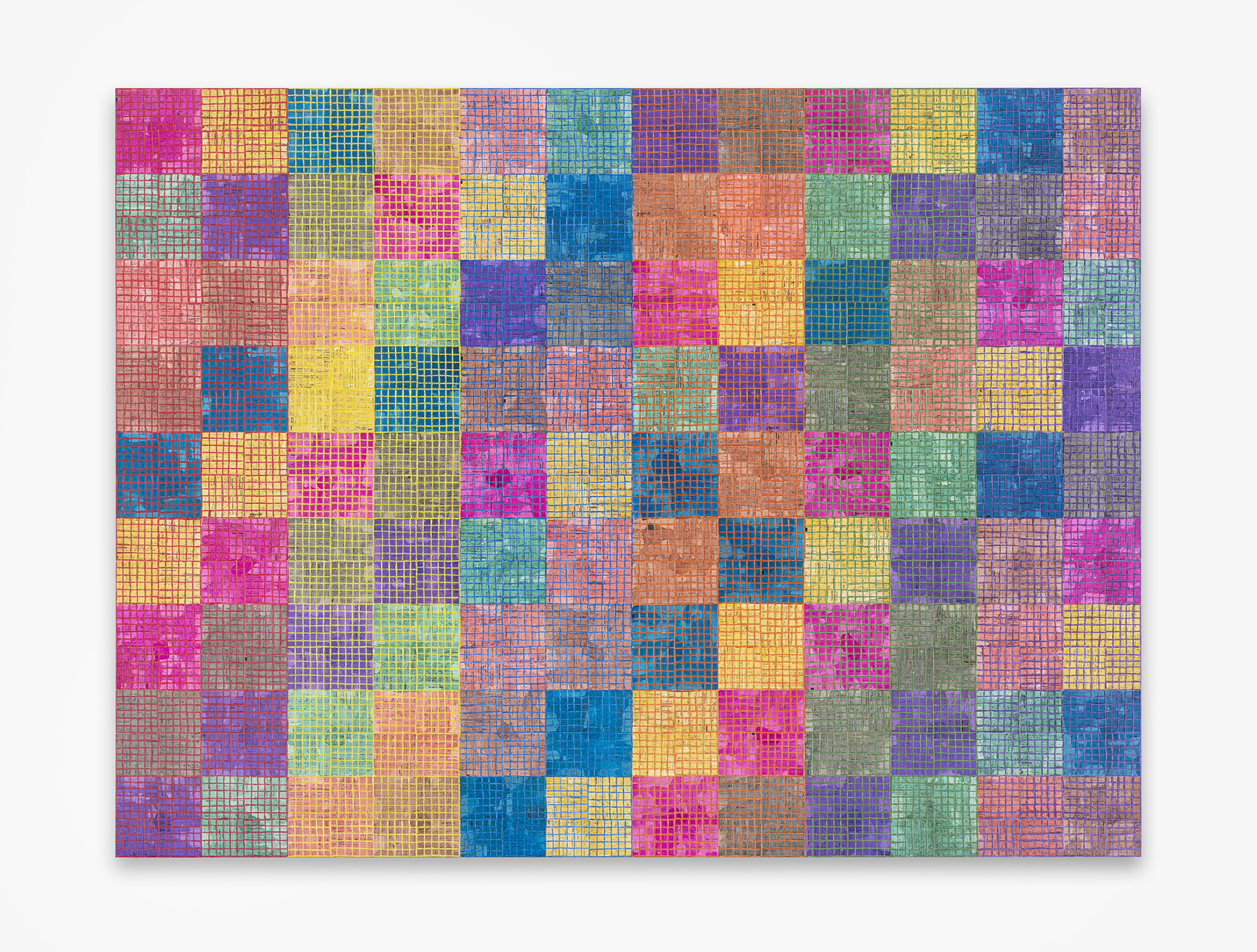 McArthur Binion’s second solo exhibition at the Lehmann Maupin Gallery in Chelsea is filled with a new series of nine paintings in the two gallery spaces on the ground floor, all titled Modern: Old: Brown (all in 2021). We can easily recognize in each of them the familiar pasted elements or patterns in Binion’s ‘subconscious’ of names and addresses handwritten on dated address book cards, her birth certificate, her profile picture. or other personal photos in repeated patterns and layers on the grid formation. They are covered with ink wash on which hand-drawn oil stick lines run perpendicular to the support in horizontal and vertical directions that pixelate the entire painting, on paper laminated on cardboard, in micro-sections. The paintings in the exhibition unite Binion’s agility with color, a study he has been pursuing for 40 years, as well as minimalism and geometric abstraction. In the first gallery, we see two works in which a large circle drawn in graphite dominates two squares painted in black; these frame a third rectangular work divided into four vertical segments vividly colored in red, emerald green, purple, and shades of gray, each framed by a repeating image in a patterned border. In the second gallery, the series transforms into large rectangles where square tiles and brightly colored vertical sections rival the darker colors of her black and white profile images. Upper-level gallery houses a collaborative piece featuring a composition-response to Binion’s work Stuttering: standing: motionless (LDM II) VI (2013) by musician Henry Threadgill as a tribute to their late friend, jazz musician and composer Lawrence D. “Butch” Morris. There are two paintings in particular that anchor the exhibition: one in the first gallery which includes small images of the severed head of a lynched black man and another rather striking colorful painting in the second gallery on the east wall.

In this latter painting, unlike the others in the gallery, which are painted with a dark brown oil stick, Binion uses sticks of multiple colors to construct his vertical and horizontal grid lines. This creates an interesting play of light and color similar to the reflections and changes of light obtained in stained glass. Up close we see glued address book cards painted with transparent, finely applied ink strokes and divided into an array of random rectangular shapes in blue, yellow, pink, orange, green, and brown. From a distance, blue squares with darker ultramarine blue lines turn into unified blue gradients, while in yellow squares, orange lines appear bright pink from afar and blue squares with yellow lines appear lime green. The variety of colors and the combinations of oil lines on colored squares create a modern musical mosaic, these subtle color changes playing tricks on the eye as we approach and move away from the painting. . When the colored lines start to differ, the paint gets subtle gradations; we feel transported in the colors and in their world which exists beyond reality. The illusory translations made in our minds create a transcendent experience.

There is a painting in the exhibition that makes us look closely to discern its pasted images of the severed head of a lynched black man. The effects of this painting are even more sensitive and moving. Its graphite circle is very subtle and escapes us if we don’t catch the painting in the right light and viewing angle, but the shape is made more noticeable with the dark glaze bordering the circle. As we stand in front of these large paintings, we recognize the pain, death, torture and horror inherent in the heartbreaking image of the lynched man multiplied over and over again. To live with this work is to live with the fragments of this image – the fragmented image of a black man – to remember that even though you cannot see it without spending time looking closely, it is there and is. as widespread and repetitive as a pattern. It not only asks us to look closely at the micro level for the subject, but also to pay attention to how the composition changes and becomes more abstract as we step back and absorb the work in its entirety. The images are camouflaged under layers of black and gray ink brushes washed and painted in thick, creating a dark, elegant and smooth texture with different tones reminiscent of black skin. These moments are highlighted by dark brown lines that make up Binion’s grid. Seen from a distance, these hint at earthy allusions to reddish Siena and, much like the colorful painting in the other gallery, unifies the dark colors into a vivid image, its mystery amplified by the omnipresence of the larger circle. ladder. The border around the painting is akin to the painted borders found in some early Italian Renaissance paintings such as Giotto’s cycle of frescoes for the Scrovegni Chapel in Padua and features a different micro-image: a black hand, reminiscent of that of 2019 Hand: Work, his first solo exhibition at Lehmann Maupin. The repetition of this image recalls the many handprints of the first urgent traces of man in prehistoric cave paintings. Blue-violet, orange and green alternate and create movement around the border, thus inscribing this dark circle. The whole picture obliges our solemn contemplation, because to stand before him is to experience his transcendent subject in an eternal place where his soul resides in dignity.

These new works reveal how Binion weaves the old, the modern and the dark worlds through abstraction and images, reflecting on each of their translations through time. Selections within the glued ‘unconscious’, combined with handwriting, hand-drawn lines, and flowing ink connect us to a meditative realm and Binion’s personal story. We can’t wait to be surprised with the next evolution of Binion’s work.