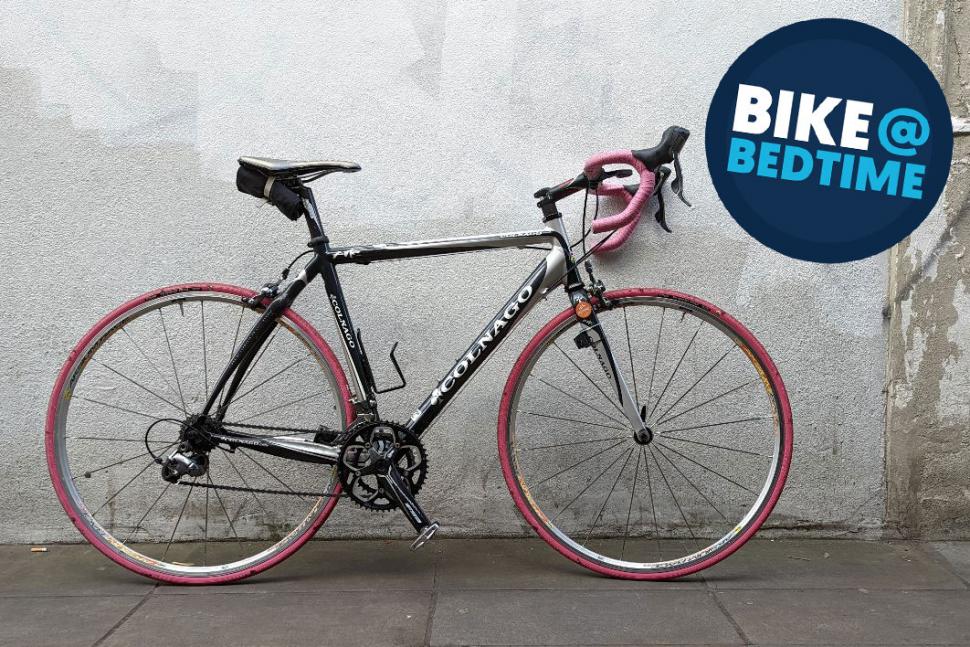 With the Giro d’Italia returning to home today for a summit finish on Etna, we’ve got a touch of pink for you for today’s Bike At Bedtime – and rightly so, on a bike. of one of Il Bel Paese most legendary brands, Colnago.

The bike itself is a bit of a blast from the past, dating back to 2008, the same year road.cc was founded, and having been in storage for a few years for reasons I’ll explain below, it is now of back on the road and is as much fun to drive as before.

I have a thing for all things Italian after my first visit to the country in 1990 and that of course extends to cycling – I spoke on the road.cc podcast about how Milan-San Remo is my favorite one-day race, and more Over the next fortnight, I can’t wait to see some stages of the Giro in person.


And that also applies to bicycles. So when I was looking for my first drop bar road bike in 2008 on a budget of just over £1000 it was obviously the Italian brands I was looking to and was about to throw on an entry level Bianchi when I came across the Primera Sports website in Bournemouth – and found a deeply discounted Colnago Arte which just came to the top of my price range and was at my size. After reading a few reviews, I didn’t have to think twice about placing my order.

At the time, the Arte was the second model in Colnago’s road range, above the Primavera, both representing a short-lived strategy by the Cambiago-based company to make its bikes more accessible to a more mainstream audience. wide, with cheaper prices made possible. due to the production of these two frames in the Far East.

I got a lot of bike for my money—a frame that mixes a 6000-series aluminum alloy with nicely arched carbon fiber seatstays and chainstays, plus straight carbon fiber forks.

Carbon fiber is also featured on the cranks and seatpost, which like other components including the stem and bars have been supplied by FSA, while most of the groupset is Shimano Ultegra in a color Very striking smoke gray anodized.

As supplied, the finishing kit was completed with a Prologo C-Lock SYS saddle – apparently allowing the lid to be swapped out for another, although it’s unclear how this worked in practice – as well as Mavic wheels Askium with straight spokes and Vittorio Rubino Pro tires in white, all for a very pleasant aesthetic.

After a few years (and a few crashes) the handlebar tape looked tired and scuffed, and I needed new tires – so when in 2013 Vittoria brought limited edition Rubino Pros in Giro pink, I didn’t couldn’t resist getting my hands on a pair, plus some Fizik tape in the closest color I could find. The overall aesthetic might not be to everyone’s taste, but I love it.

A few added touches from your real one are a Rapha saddle roll to hold a multi-tool, spare tubes and tire levers, nicely secured with a trail toe strap and stickers on each fork, one from The Times’ Cities Fit For Cycling campaign launched in 2011, the other from a similar initiative, Salva I Ciclisti (Save the Cyclists) launched by La Gazzetta dello Sport soon after.

As with any new road bike purchase, pedals are of course a personal choice and I decided to go with a pair of Crank Brothers Quattro, the road product the American mountain bike company briefly had.

Why? Well, they’re based on the company’s iconic Eggbeater design, which is what I had on my Giant FCR flat-bar road bike that the Colnago was intended to replace.

I had arrived at Primera at 10am and after a helpful member of staff measured me to make final adjustments to the bike setup, I went to a cafe across the road for breakfast while they made the necessary adjustments. About an hour later, I proudly pulled my new bike out of the store.

Now, as any of my colleagues on the road.cc team will tell you, I’m not the kind of person who can give wisdom on bike tech issues, but here’s a little advice I can share with confidence, sustained experience – NEVER attempt to ride a new bike with new shoes, cleats and pedals when you are somewhere exposed and the wind is blowing from the English Channel at 50mph.

First attempt at a crank turn and I was lying on my back luckily the only damage being to my pride and not the bike I reasonably decided to walk back to Bournemouth station – luckily once back in Oxford, with no wind to contend with and a relatively traffic-free return route, I was finally able to board and right off the bat it was a lot of fun to drive.

Over the next few years I developed loops from Wolvercote, then Woodstock once I moved there, and finally Chipping Norton, and loved cycling in the countryside to the west and north of Oxford.

Then I moved to Cambridge, dividing that with visits to London, and with a small dog in tow (and too often luggage) my riding went from going out a few times a week on the Colnago to hauling my miniature schnauzer around on my Elephant Bike, and the road bike has been put into storage.

With the first lockdown in 2020 requiring me to move full time to London and my (Italian) partner’s flat he stayed there until last month when I finally managed to organize myself sufficiently to move my stuff here, where it joins the old Raleigh singlespeed conversion I use for my daily commute.

Last Saturday, waking up at what for me is an unusually early hour and with the sun shining, I took the Colnago for a long awaited ride, through Gunnersbury Park and Brentford to Syon Park then along the river to Richmond and, after a coffee stop, back home via Kew, and loved every second of it.

It won’t replace my single-speed workhorse – I wouldn’t leave it outside a supermarket for 15 minutes, let alone a football pitch for a few hours – but it’s nice to have it back, and it will certainly be less neglected now than it has been in recent years.

And – as you can see from the pictures – it will start with a much needed cleaning, but given that I will have to do this on the balcony, possibly when my partner is not around.