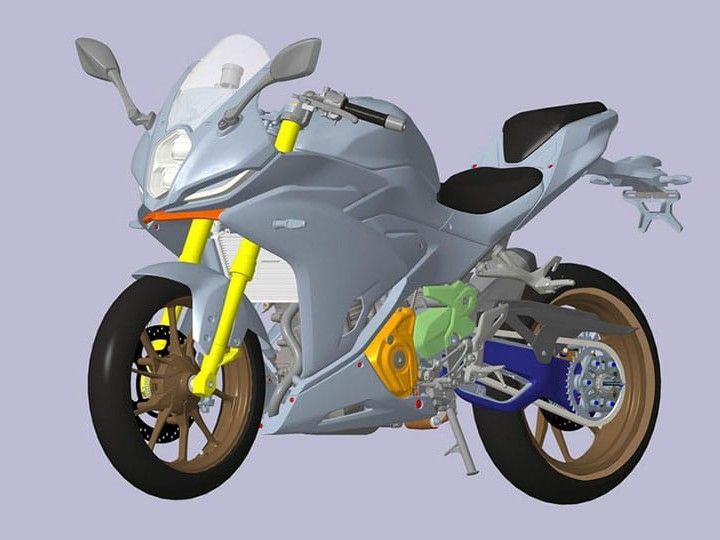 Qianjiang Motorcycle, the parent company of Benelli, has filed a patent application for a new 400cc supersport that shares an uncanny resemblance to the Benelli Tornado 252R. This particular patent alludes to the development of a new 400cc bike by the Italian bike maker, which could simply be called the Tornado 402R.

Benelli’s sister company QJMotor recently launched the GS400RR supersport in China and the new patent model obviously shares a lot of features with that bike.

In terms of looks, the supersport borrows a lot of visual cues from its little brother, the Tornado 252R. It gets a similar vertical headlight with DRLs and an aggressive fairing design, which is bolder on the 252R, whereas on the 400cc bike patent, the fairing and headlight design looks cohesive. The patent also shows a similar muscular fuel tank and raised passenger seat, similar to the 252R.

The bike is expected to be powered by a 400cc liquid-cooled twin-cylinder engine based on the same platform as QJMotor’s 400cc motorcycles, which, in turn, is quite similar to Kawasaki’s 400cc engine. However, the motor housing on the design patent is slightly different from the GS400RR, so we won’t know more details until the brand discloses. It can be expected to produce around 44.8PS and 37Nm, similar to the QJMotor SRK 400 RR, which should be good enough to take on the KTM RC 390, but its other rival the Kawasaki Ninja 400 does around 4PS and 1Nm moreover

According to the renders, the bike is suspended from a USD fork up front and a monoshock linked to the single-sided swingarm, which is typically found on much higher end bikes. The bike is anchored by a single disc at both ends and should come with the dual-channel ABS safety net (similar to its smaller sibling).

The Benelli 402R looks like a promising contender to take on the other 400cc supersports. However, its success will mainly depend on its asking price.