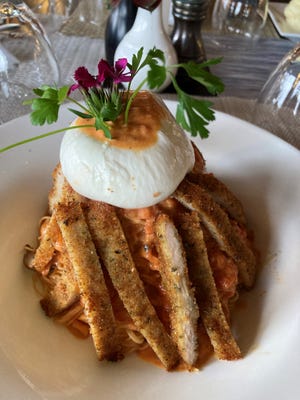 Pleasantville has always been a restaurant town. Three years ago, in 2019, we wrote about the explosion of new places along the short stretch of Wheeler Avenue with the opening of the trattoria Dolphin SouthAsian street food restaurant fatty root and the beginnings – literally the day the pandemic shut down the world – of soul brewa microbrewery owned by longtime home brewer Allen Wallace.

But recently there’s been a new wave of business and openings, including a steakhouse, a cocktail bar, an Italian restaurant (where karaoke is king) plus new additions to beloved favorites.

Belonging to a woman: 17 Restaurants in Westchester, Rockland, Putnam

Insider News: Sign up for our free lohudfood newsletter

This is in addition to new arrivals Root2Rise (open since June 2021), The taco project (open since March 2021), the Seafood Market Grill (open since April 2021), Second mouse cheese (open since 2019) and Lefteris Gyroscope IV, another novelty for 2019.

If you haven’t walked along Wheeler lately, or if you went to see a movie at the Jacob Burns Film Center and are wondering where to go before (or after) your movie, here are some options. And yes, we know, parking remains the same problem it always has been.

Those who remember Chatterbox 54 from Briarcliff Manor will now find its reincarnation in the old Mediterraneo space under the shortened name Chatterbox. Joseph Pandolfo, owner of the restaurant with his father (who shares the same name) and brother Michael, has made the space – which opened in March – more open and airy with a long 25-seat bar and menu expanded.

Old-time favorites such as rigatoni pork braciole, zeppole with homemade cannoli cream, stuffed artichokes and veal parmesan on the bone are still on the menu, but now there are more modern twists like pasta a la cugine, linguine topped with slices of chicken cutlet in a vodka sauce and garnished with burrata. The restaurant’s popular Thursday night karaoke is also back and filled with people singing along. 75 Cooley Street, 914-495-3900

Lucy’s, a Pleasantville mainstay since 2004, has been transformed into three distinct venues, each offering their own unique experience. The front area dedicated to live music is now the Garage, decorated with power tools, old license plates and numerous horror movie references, a passion of General Manager Rob Catalano. The back room is now the basement, done up to look like the kind of 1970s hangout your parents (or you) grew up in with a 1982-era jukebox, Pac-Man machine and a TV playing old favorites like “Three’s Company.” Upstairs is the Digital Frontier where there are seven pinball machines and arcade games, as well as a changing machine (as all games take quarters).

The food menu has also been upgraded to include a fried chicken sandwich, BBQ pulled pork, cauliflower crust pizza, salads, smashburger and wings. Catalano said the pandemic has given him time to think about what he wants to do as well as the time to do it. The revelation took place in November. 446 Bedford Road, 914-747-4740, facebook.com/LucysLoungeNY

Cliff Mascarenhas, owner baroso in Yorktown Heights, always wanted to open a steakhouse. And so he did on April 16 when he took over the former Bollywood Grill space. The 49-seat restaurant has the same layout, but with a redecorated interior. Diners can expect black tablecloths, a couch in the bar, and a menu filled with USDA-grade meats. 68 Wheeler Ave, 914-239-8807, theprimestkout.com

Open since April 20, this new cocktail bar, in the former Flights space, is all about – and famous – storytellers, from food and drink to art on the walls and music on the floors. speakers. Owner (and Croton-on-Hudson native) Michael Boulos, who previously worked at the (since closed) Restaurant North in Armonk and the Bedford Post in Bedford, said his mission was to provide customers with “a unique bar that stands out from sports bars, college dives, and restaurant bars” with an emphasis on “quality, seasonal ingredients, a centuries-old dedication to craftsmanship, and attention to detail.”

“I will bring to this place the same principles that guided us at Restaurant North when we first opened,” he said.

For that, expect a seasonal menu of small plates like the Strawberry Field Salad (strawberries marinated in cognac, dehydrated strawberry crisps and roasted goat cheese and honey carrots with labneh, za’tar, sumac, sunflower and micro chives), as well as cheese and charcuterie boards and a focus on botany. Ingredients like rose water, orange blossom, fennel pollen, herbs and edible flowers are part of the food and beverage program. Another highlight: the Spanish-style gin and tonic cups.

Boulos is also planning Pimm’s mugs in the summer (an ode to his time in London) and antique absinthe fountains. 10 Marble Ave 914-769-4040, theraconteurbar.com

Jeanne Muchnick covers food and meals. Click here for her latest posts and follow her latest culinary adventures on Instagram @lohud_food or through the lohudfood newsletter.