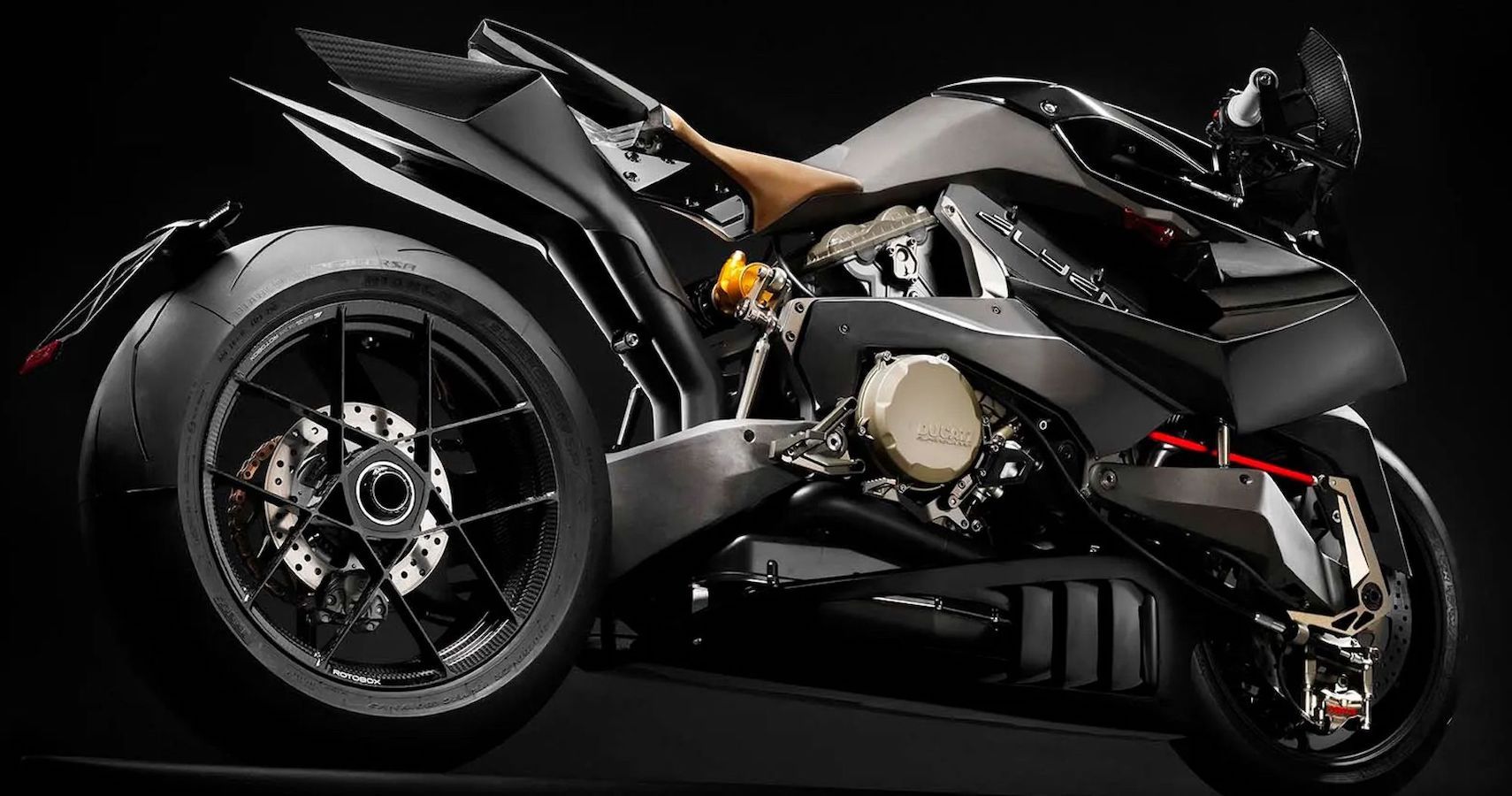 We recently spoke to Vyrus Motorcycles founder Asciano Rodorigo at his workshop in Rimini, Italy. When describing the airbox design of the Alyen 988, he gave insight into its fanatical attention to detail and obsessive quest for lightness. “A CNC aluminum base, which is also a load-bearing structural component of the frame, is mated to a cast magnesium body and carbon fiber cover, with a plastic housing for the sensors.” If you’ve ever looked at your bike’s airbox, you’ll know that they’re usually nothing to talk about and are usually made from molded plastic.

Handcrafted from exotic materials, combining bold styling (to use a blatant understatement), angular styling and premium components, and adding to the Alyen’s exceptional credentials, the most striking feature of every Vyrus , a hub-center steering system (HCS) without a fork. It’s tempting to say that the Vyrus Alyen is the Pagani Imola of motorcycles; they both share Grand Prix-level engineering and performance in a street-legal package and have price tags to match, but the comparison doesn’t do the bike full justice. The Imola still looks like a car from the 2020s, while the latest Vyrus looks like a prop from a big-budget sci-fi movie.

From Bimota to Vyrus

Asciano Roderigo hails from Rimini, in Italy’s Emilia-Romagna region and the epicenter of Italy’s motorcycle industry. His father was a friend of Masimo Tamburini, co-founder of Bimota, and destined to become a legend among motorcycle designers. Young Rodorigo joined Bimota in 1982, working under Dervis Macrelli, already a renowned frame builder. Tamburini, an obsessive perfectionist, made a strong impression on the rookie engineer.

“Tamburini was a real master, a maestro.” Rodorigo told us: “Before changing the engine oil, he had us check the workshop floor with a spirit level.”

When Bimota met its first financial fracas, Tamburini came out, accepting an offer to run the Centro Di Ricerca Cagiva, the source of so many glorious machines, including groundbreaking bikes like the Ducati 916 and Paso, and the beautiful MV Agusta. Brutal, and very special, F4. Rodorigo left to open a modest workshop making custom parts and modifying and preparing racing bikes. Fifteen years later, he would partner with a reborn Bimota to help develop the new Tesi and its innovative Hub-Center steering system. It would also be the genesis of a new Italian brand: Vyrus.

Hub-Center steering has been around almost as long as the fork, and its first recorded use on a motorcycle was in 1910. HCS is a much more complex system than the fork and remained an outlier, but in 1981 Pierluigi Marconi and Roberto Ugolini breathed new life into the concept when they designed an innovative prototype as part of their final year thesis at the University of Bologna. Tamburini is interested in it and the Bimota Tesi 1 will be the first contemporary motorcycle equipped with HCS since the Yamaha GTS 1000.

RELATED: These Are 9 Of The Best Italian Motorcycles Of All TimeYou may ask, why bother? Reinventing the fork seems no less redundant than reinventing the wheel. However, the fork suffers from two fundamental drawbacks. First, the braking forces transmitted through the fork compress the springs, leaving less travel to handle the road surface. The resulting dive also narrows the steering geometry, reducing stability, and conversely, accelerating extends the fork reducing steering response. Second, even the best fork assemblies are subject to some degree of flex due to the leverage applied through the legs around the headstock. When the fork legs flex, the result is stiction (additional friction), preventing the fork legs from moving freely.

The Marconi HCS system uses a ball joint at the wheel hub. Steering inputs act on the front wheel through a series of mechanical linkages that terminate in a quadrangle of rods extending from the frame like a swingarm. This arrangement has two distinct advantages; braking forces are directed horizontally through the steering stems, greatly reducing their effect on the suspension, and the steering geometry remains constant. Nevertheless, Marconi and the Bimota team (which now included Rodorigo’s company as consultants) struggled with the concept for ten years, never fully overcoming the Achilles’ heel of the HCS. Namely, complex linkages lead to loose and inconsistent steering response.

RELATED: This Is What Made The Bimota Tesi H2 So Great

Bimota’s history oscillates between brilliant successes and dismal failure and, during the company’s second insolvency, Rodorigo decided to pick up the Tesi project where Bimota had left off. The result was the first Vyrus, the 984, and arguably the first fully refined rendering of Marconi’s innovative HCS design.

The decade that followed culminated with Vyrus’ latest addition to their repertoire, the Alyen. Prominent contemporary designer Yutaka Igarashi has teamed up with Vyrus again on their latest project and has been tasked with interpreting Rodorigo’s vision, based on an idea sketched by former MV Agusta designer Adrian Morton. Igarashi created a surprisingly unique outline incorporating a floating handlebar and a “neck-shaped living thing” nose section. The Alyen also utilizes the company’s most advanced HCS design to date, their Hydraulic Hardwired Steering System (HWSS).

At the heart of every Alyen is a Ducati Superquadro 1299 engine, the same engine driving the latest Panigale. The water-cooled, 1285cc, 90-degree V-twin has a bucket-sized 116mm bore, producing 205 hp and over 100 lb-ft of torque.

Encased in an Omega magnesium alloy frame and adorned with a unidirectional (UD) carbon fiber body. UD is a composite with all carbon fibers aligned in the same direction. It exhibits higher tensile properties and the untreated surface has a unique texture resembling brushed aluminum.

Every aspect of the manufacturing process is aimed at minimizing weight. Rodorigo describes the core parts making up the Alyen as an interdependent system, removing one of them compromises the whole, even the airbox is a load-bearing element. In addition to the extensive use of UD carbon fiber in the bodywork, the 988 has forged magnesium wheels and swingarms, Ergal 7075 connecting rods and rocker arms and carbon-ceramic disc brakes.

The list of Alyen components is equally exotic. The suspension uses a proprietary pushrod system – at both ends – combined with Ohlins TTX 40 monoshocks. magnesium are fitted with Pirelli Diablo Supercorsa SP V3 tyres.

The unconventional style of this rolling work of art defies description. From the side, the floating steering head evokes the alien moniker. Front-on, there’s something about the flared UD carbon panels that look like a samurai warrior’s shoulder armor. Everything, the seat, the exhaust pipes and the rear cover are uniquely styled. We are only grateful that Vyrus sent us many images. Beauty, after all, is in the eye of the beholder, and you can judge that for yourselves.

A plan for the future

Vyrus only plans to make 20 Alyen 988s, and their unpublished price is bound to be beyond the means of all but a few. As such, it’s tempting to write off Vyrus’ latest off-the-charts creation as a showpiece, unrelated to all but a handful of wealthy enthusiasts. But I would argue that today’s hyperbikes lay the groundwork for the mass-produced machines of tomorrow.

Many of the technical issues that Rodorigo and his team are currently solving will form the basis of new designs incorporated into motorcycles destined for our future garages. Who knows? In a few years you may be able to buy a UD carbon coated Ducati with Hub-Center steering.

Guy started riding motorcycles at 21 and bought a Kawasaki ZX-6R the day after his road test. He was a sportbike enthusiast for many years until in 2010 the television series Long Way Round inspired him to organize an adventure motorbike tour. Since then he has traveled thousands of miles across the US, Chile, Argentina, Canada and the UK on various adventure bikes. He attended adventure bike school with the BMW Performance Academy, trained in enduro with Off-Road Skills in the UK and recently honed his sportbike skills at the famed California Superbike School. He spent a year in amateur endurance car racing and attended Skip Barber and Dirtfish driving schools. Guy was previously the Editor of Ride Reviews at Rider Magazine, and his stories have also appeared in Adventure Bike Rider, ADVMoto, and DRIVETRIBE. In 2020, Guy was one of three winners of Moto Guzzi’s “Spirit of the Eagle Rideaway” competition.

The Most Scenic Road Trips in Northern Italy